"We would all be a lot better off letting go of hope and doing so because we are imbued with truth and the sparkling spirit of the path of Fearlessness."  It is more important to get to really deep--really real--to get to know and understand 'who we are', than to try to be more hopeful.  -rmf

And Mother Earth would also be a lot better off. We require in the midst of the severe cascading crises and extinctions of the 21st century, something 'way beyond' hope. The sooner we learn that lesson the better, for the time is drawing nigh for the Reconciliation.

From the BEGINNING of my thinking and writing seriously about "In Search of Fearlessness Project" (since late-1989), I always had this mystical awareness of the work I was doing, more a calling and vocation, and that it was going to be a full-on assault of the notion of, and the discourses of, HOPE (and, what I see is an addictive and toxic form, too often a process of hope-mongering). Fear-mongering as it turns out and hope-mongering are two-sides of the same coin.

Over the 30+ years since, I have refined this problem of hopeism that pervades the legacies of virtues ethics, developmental theories, moralism, and of just about the entire W. Dominant worldview's way of communicating. Our very modern 'self' is soaked in the rhetoric of "hope".... and, it's turning out to "failing" us all--and, consequences are severe.

I won't go into the depths of my original critique here [1], rather, I merely wanted to share a few recent things that have come across my desk, that reflect my own work on developing a "replacement therapia" (or call it a philosophical and collective cultural therapy) needed to re-vision and re-inform us all 'about who we are.' My first triggering moment in the last day on this issue came from a masters' students, in their 20s, writing a draft of their experience of joining the climate activists in our local community and then finding out what that really involved--that is, more than anything, a whole lot of "climate grief" and, yes, some healing too. Listening to this piece of writing of this nascent activist and their 'calling' to help the world, it was so good to hear the consciousness they brought to the problem of trying to solve wicked problems like global warming, and to change and transform politics--but also, I was so aware of how this young person (like so many) has just begun to take the lid off of a can of worms of immense 'Darkness' upon the earth right now, and which will get a whole lot worse before it gets better. I was thinking of this young person, reminded of myself at that age and becoming an environmental activist, and the myth of Pandora's Box. You know, its the ancient Greek myth (or earlier) historically that told of what happened to the world when one took the lid off--lifted the repression--tried to come awake--and, then was bombarded with all the great horrors of the world (individually and collectively)--all at once--and, of course it is overwhelming, but then so the myth goes (as I vaguely recall), IF one sticks in there and faces all the 'demons' and 'horror' --that is, all the fear and terror--then, there was one last thing to come out of the box, and it was HOPE. The question was then perhaps, and it is certain my question now--based on doubt, is there anything that HOPE can offer to solve the real issues of the day--in the 21st century? Is hope even useful anymore... once the world has slipped by, and passed over, the 'path of return' from the massive ecological devastation that has been wrought by millenia of not caring enough for this planet's sources of life--and gifts. We have abused Her too long. Her Box, like Pandora's Box, is now all coming out--the immense horrors of climate change and all related phenomenon--psychically and sociologically-- you name it. We are in the decline of civilization as we know it and there is no turning back. Oh, but wait, so the myth goes, there is still hope? Right?

Now, to my next story, just came in an email this morning, as my colleague Four Arrows [2], an activist and Indigenous-based educator and transformer, shared with me his letter to a group of young people trying to transform higher education via their movement for "ecoversities" (i.e., universities with near total emphasis in their philosophy and curriculum geared toward solving the ecological problems on the planet). My colleague of course was admiring of this overall cause, but was critical that their latest conference theme was "HOPE." Hmmm... how interesting, and how troubling too. I won't cite the email letter here that my colleague wrote to them respectfully, but quite upfront a challenge for them to consider, as I paraphrase, he really said there is no evidence overall that "hope" as a virtue will be effective to the great transformation we require, and quite likely the same has been true of much of human history. He argues (and see his new book below) that the great activism that has arisen in spirit and in action, has been more or less always moved forward into the world because of something well 'beyond' hope--and, I see Four Arrows is articulating the basis of his critique of much of activism, and of traditional Enlightenment virtues, etc. His postcolonialist critical lens, like mine, sees through--and sees that "hope" is a side-tracking venture hooked to fear-based ways of thinking and identities. Hope is an illusion, he wrote. Okay, that's enough... I'm trusting this blog today will add to the current re-thinking so needed on the role of hope (and fear)--and, to replace hope with fearless(ness) or more accurately, what I call a "fearless standpoint" (e.g., see my writing on Four Arrows, in Fisher, 2018). Note, that Margaret Wheatley has written the Foreword for my colleagues book, and this doesn't surprise me one bit as she is a strong advocate of 'beyond hope' and towards a "fearless" perspective (and, yes, she is a Buddhist as well). 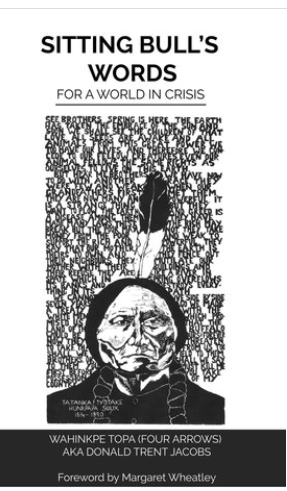 The "replacement therapia" is a concept that still needs work, and yet, I thank my colleague for raising this issue again, as to a direction 'beyond hope'--and, to end this missive, it is worth repeating something in his email today, and that is, what he sees the Indigenous perspective (I situate as a fearlessness paradigm) has to offer as a great alternative--and, and it is the idea that we ought not be distracted by our need for hope (if not, our addiction to it)--and, rather focus on the process of "recovery" of our sanity which will involve our coming inquiry, our critique, our healing, and our re-visioning of our very nature here on this planet and beyond this planet--in the total Mystery. The more we do that work, the far less dependence we'll have on "hope" or "fear" or .... okay, you get the picture. Let's proceed with that deep quest of knowing... and, from my point of view, the "path of fearlessness" is as good a way to go as anything else, it may even be "better" because it has long ago left the dependency on hope, and even on courage.

p.s. another who has rejected American "hope" pretty much, is the political journalist, Chris Hedges [3]