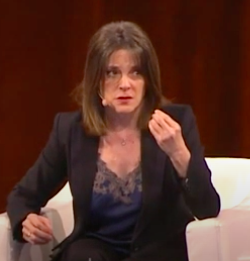 Marianne Williamson is deeply serious... about the future. In this talk recently on Wisdom 2.0, she takes the host of the program and the audience through a 30 second exercise which is clearly a hypnotic induction but does so without telling anyone that is what she is doing. She would likely justify this is her love-based good intentions, and so on... but, what is unethical [1] to me is her assumption that people want to be both de-hypnotized and re-hypnotized by her use of FEAR, AUTHORITY, WORDS [2] in this intervention. Clearly, she is criticizing (especially, young) people for 'wanting to not have children because of the not so good future that is coming'. [3]

See the full demonstration of this manipulative pedagogy she induces in the interview: https://www.youtube.com/watch?v=4zQkIDdPUbA

What is so contradictory in Williamson's pedagogy (preaching) at times is just this reality that she for one knows about and teaches about the mass hypnosis of all people (media, etc.) as propagandizing. She knows we are in a 'trance' (an illusionary state) re: reality. But, she also is not teaching people about the process of hypnosis and then asking them, if this is what they want to go through with her because she feels called to 'help them' out of their delusions (?). Yikes, this is where she gets off the rails as far as I am concerned and assumes way too much, is way over-confident, and missionary zeal takes over rather than really respecting the people sitting in front of her.

I have just written a book on Marianne Williamson Presidential Phenomenon --an intellectual biography and critique (her strengths and weaknesses as a leader) go to:

1. "Unethical" has many layers of meaning which I will not be outlining further here in this short blog, but to say the least, it is therapeutically and philosophically 'off the rails' to be so confident that you know people's intentions when you asked them a question (e.g., about the future and having children). In other words, that you know them so well that you can call their choice "deeply, deeply aberrant" (i.e., pathological by any other name). Sorry, that's bad practice, even if it is partially true. There are so many kinds of justifications a person may have for raising their hand that they don't want a child in this world, including the fact that IF one lives in a so-called highly developed (First World nation) the environmental cost of that child on the planetary ecology is outlandishly excessive relative to other nations (e.g., Third World). Unfortunately, Williamson gives us no real reason for her pathological ascription (and dramatization of it with such serious and confident commitment) as "aberrant." It all comes across to me as her fear and her ideology rather than really level-headed analysis and 'good practice' therapeutically and philosophically.

2. The CAT-FAW/N (meta-cognitive) model and theory of Four Arrows, an Indigenous-based educator-philosopher and trained hypnotherapist, has long been a part of my work and you can look his name up on the FM ning---and/or see my book (an intellectual biography) "Fearless Engagement of Four Arrows" (2018).

3. Of course, she would likely defend herself here and say 'I am not diagnosing people as pathological [i.e., aberrant], but the society that makes them that way." Ah, yeah, right. As if they are not intimately related and part of a co-evolving dialectical dynamics of self/system.