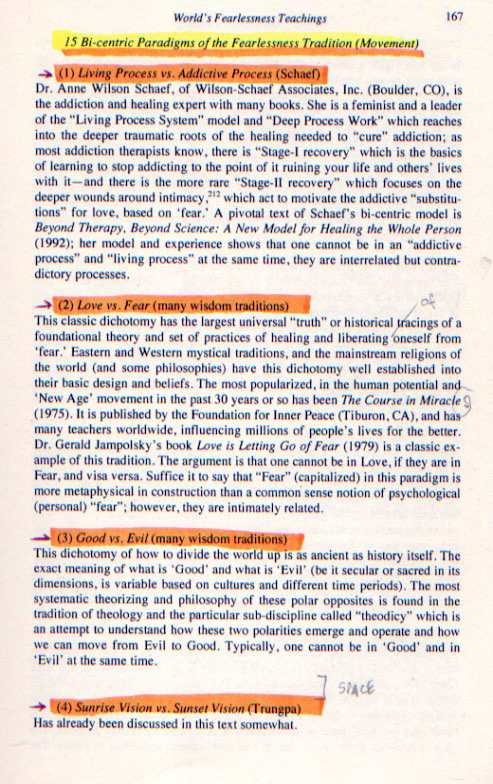 Philosophy of Fear is a welcomed contribution to the world of theology, philosophy and any serious thinking about the nature and role of fear, love, courage and fearless action. Yes, other philosophers throughout time have taken on these subjects before. It is however, Eneyo’s relatively new angle on these topics that is exciting as an interpretive framing with a practical application of guidance for a very wide public readership.

I am especially honored to be asked to write a brief Foreword, and that that request comes from across the world in Nigeria, where Eneyo lives and writes. There is something happening in Nigeria around the topic of fear. Some months ago I was invited to write a similar brief contribution for a new book by Osinakachi Akuma Kalu, a young up and coming Nigerian fearologist.

Eneyo’s book is a gathering of a lot of years of experienced thinking and writing. His formal higher education in philosophy comes through on every page. Yet, he keeps the work readable and non-esoteric. Like Kalu’s work, he has been attracted to the new angle, new lens, that is emerging in the last few decades, where there is a fundamental shift in consciousness and perspective regarding the philosophy of fear. Both authors utilize Desh Subba’s discovery of a philosophy of fearism.

Subba is a poet, writer, and public intellectual born and raised in Nepal, now living in Hong Kong. There’s a curious close interconnection I have witnessed in Subba’s fearism conception that is appealing to the Nigerian thinkers on fear today—with Kalu and Eneyo, both Christian thinkers interestingly, taking on the leading work to develop their own interpretations of fearism, yet relying somewhat on the fearism declaration that fear is fundamental to all human behavior and because of that it ought to be given its own philosophical label—that is, fearism. If there is existentialism, or rationalism, why not fearism? That’s the direction Subba has led and several other thinkers are following.

For my part, as a seasoned scholar on the nature and role of fear, taking a transdisciplinary and internationalist perspective for three decades, I am also a ‘Westerner’ and white person born and raised in Canada, while having recently lived in the USA for nine years. I have a very different perspective on fear and its management and I have been exposed to much different literature on fear as well, different from my colleagues above. Although, we also have some overlaps. I truly have enjoyed their openness to connect with me and my work and I’m sure there will be more such collaborations in the near future.

Before I comment directly on some of the content of Eneyo’s first book on the topic of fear, I want to say that he is courageous to align his thinking with the wide-open territory of the philosophy of fear. I too have been interested in this topic and territory but it has not always been easy to tell who is researching and writing in this area of philosophy of fear. Some are doing so but have not named it as such, and others like the Norwegian philosopher Lars Svendsen have used “philosophy of fear” in a recent book title. Yet, only a rare few philosophers have ever focused on developing consistently a philosophy of fear per se. This is where Eneyo has stepped over the boundaries of traditional and incorporated the new fearism, producing his own version and branch, school, of a philosophy of fear. Truly, it is remarkable to me to finally see more authors taking up this topic seriously. It is long overdue. And, it intrigues me how the various schools of philosophy of fear(ism) will evolve in the future, and what kinds of critical and creative dialogues will be established between the schools. I suggest this international movement could produce some good results to help humanity and continue to drive the forces of what I have labeled the global historical Fearlessness Movement.

Now to Eneyo’s book specifically. Although I do not endorse all his perspectives on the topic of fear(ism), he has a sincere voice in this book which deserves attention from people from all walks of life. I see that broad scope to reach many readers as important to his cause, just as important as his core mission. He is out to teach two major things: (1) fear needs to be interpreted as equally positive as negatively and the same goes for love (I appreciate his articulation of how even love can be negative sometimes and we must be critical of invoking love in our discourses) and, (2) “... courage and [positive] love are the greatest weapons to be used to manipulate any aspect of fear [management] to our advantage...[in order] to make a fearful or fearless decision” (p. 115).

Ultimately, like other authors in the Western world of North America, Eneyo repeats the imperative that we ought to be more fear-positivists (that’s my own term), which is traceable to at least Aristotle’s philosophy as well and that the real moral issue for Aristotle, is that we ought not try to avoid being afraid but rather to be wise and courageous (if not loving, in the Christian humanist sense) so that we don’t end up fearing that which we ought not fear what “does not actually deserve our fear” (as Eneyo suggests, p. 115). I encourage Eneyo and others to examine my own critique as well of fear-positivists and their discourse, which I believe has a down-side as well as an up-side. Anyways, the bottom line of Eneyo’s or Aristotle’s teaching is that we see fear as something more complex and dynamic, and especially as it interrelates with courage and love. I am all for that complexification of our knowledge systems regarding these topics.

In closing, an intriguing concept Eneyo offers to the subfields of fearism and fearology is his concept of “fear territory” (pp. 31-32), which it seems he must be an original in coining the term. He defines this in the book, and it is worthy of more study as a useful concept, somewhat analogous but different from my own expansive notion of “fearuality” or others who have written about the “ecology of fear,” and “geography of fear” in the social and biological sciences literature. The fear territory offers a geographical and philosophical metaphor to fear study and thus identifies a domain of human experiencing as a unit of research and reflection where “our decision [re: our relationship to fear] during this period [and location] can be either negative or positive” (p. 32).

This is consistent with the Subbaian philosophy of fearism in general, because Eneyo posits that fear is just that important to all human behaviors and decisions behind them—meaning, fear is the ground/territory itself upon which humans think and act. In this expansive view, fear is a grand relational and rational territory. Such a notion ought to prevent us from forms of reductionism when thinking about fear—a reductionism common in contemporary psychology where fear is reduced to only neurobiological and chemical sources and dynamics. In my own work I have introduced the necessity of ‘fear’ (with ‘ marks) to show the term is under deconstruction and reconstruction. The trained theological and philosophical perspective of Eneyo is, like Aristotle was in his own day, sharp enough to avoid that reductionism.

However, neither Aristotle nor Eneyo has taken on the postmodern mantle and created a ‘fear’ studies project for analysis paralleling the study of a philosophy of fear(ism). Future developments in the philosophy of fear by Eneyo and others I am sure will eventually lay the ground for dialogues of premodernists, modernists, postmodernists and beyond—we’ll need all this rich holisitic-integral discourse I believe to better understand the phenomena under investigation—be that fear and/or ‘fear.’ I am pleased Eneyo has engaged in his book some of my philosophy of fearlessness as part of articulating his own approach.

So, I wish this new book by Eneyo to have its success, especially on his own continent Africa, and that we all will learn more about fear management based on the kinds of responses to his work over the years.

I was just opening a page in my book The World's Fearlessness Teachings: A Critical Integral Approach to Fear Management/Education for the 21st Century (Lanham, MD: University Press of America, 2010), and this is what I thought was worth quoting today re: ISOF Project (In Search of Fearlessness):

"After ISOF's rise (1989) and fall (1999) as an organization, I had been researching and writing to figure out what went wrong: why did it collapse, at least, in its first community manifestation in Calgary, Alberta, Canada? This is not the first time in history (herstory) that various visionary leaders [like myself] have witnessed the painful collapse of a radical movement. Usually they follow that with a reflective incubation and exile. They attempt to think through and write about their theories of revolution once again, before they pass away. ISOF Project is still going strong--in spirit--in the spirit of fearlessness. I expect new forms will emerge in the future; its inevitable, no matter how much one sees Fear's Empire growing and dominating (e.g., post-9/11 era). That said, it gives one great moral strength to carry on a Tradition (still unrecognized), when one finds that other's have acknowledged the importance of fearlessness in our future and attempted to lead movements to make that known." (p. 172)

It is now 2015, and as I reflect on this passage, sitting in Calgary at the computer awaiting emails from people I put a 'call' out to here, there is a sense that a lot of folks have more or less folded into a practical (pragmatism philosophy of life) way to be. I'm still appreciative that we have to be pragmatic to survive, I should know as a person who has been underemployed and unemployed for 22 years or so. Yet, I am still a critical thinker not willing to fold under my essential rebel spirit (of fearlessness). I am still willing to lead this fearlessness movement in some form, somewhere.