Climate crisis as part of an amoral economic system is part of Marianne Williamson's presidential campaign to tell the American people the whole truth and nothing but the truth. The question is, will the people be able to handle the truth? Fear can play it's own game of denial and forget, suppression and repression, and unfortunately I predict more and more people will carry on as 'business as usual.' Meanwhile, things will only get worse--and, deep below the surface of suppression and repression--eventually, more and more people will be overcome by the unconscious and collective fear/terror that's inevitable. Williamson teaches Love over Fear, Love as the solution to Fear-- and, so, you'd think perhaps a lot more people would 'rise up' and join her Revolution to transform America and the future. She will not be able to do it alone.

See my series of two videos on Williamson ... https://www.youtube.com/watch?v=CHDlATRUYLM 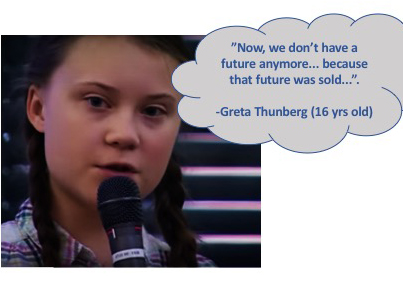 The fear of eco-turbulence is the greatest one.

I too, like Adhikari and other fearists (of recent expressions), am seeing something powerful amidst the current zeitgeist on the planet in general, of something which could be called “eco-fear.” This is the fear related to eco-issues (i.e., environmental and global issues of great ecological consequence to quality of life (and Life itself) in the early part of the 21st century).

I have written about this topic off and on, not the least of which was my series of technical papers on what Simon Estok calls “ecophobia” and its importance in literary criticism and beyond.[3] Many issues are thus being raised about the relationship between eco and fear that require more analysis and perhaps ‘better’ guidance than so far offered by anyone thinking about this. I’ll attempt to move forward this discussion and offer some direct guidance as consulting to eco-fear—and, I think I can do that best through a case study, albeit, it is more imagined for me personally at the moment than real. That is, climate change education (CCE) of which some in the literature refer to it as merely “climate education” but it is assumed they are speaking about “change” and big changes in climate—that is, global warming and the human-causation of that phenomena and the issues around how humans can mitigate the impacts of global warming crises upon us now and that are to become increasingly severe by most scientific predictions in the next decade or less—to the point, where mass extinctions of species and perhaps, more or less, our own species is immanent as is the product of great risk of toxification that will destroy life-sustainability on planet Earth.

I will not here, go into an analysis of the toxification problem, that is global warming as part of the CCE curriculum per se—if anything, I will focus on the issue of “fear toxification” as one particular angle in the discussion, whereby over the last several years I have made the direct analogy between CO2 rising levels of threat to Fear rising levels of threat[4]—both, with their interdependent relationship and mutual causality (arguably). I’ll not pursue this relationship in this paper further than this mention. There are other concerns I am focusing on here and they can simply be wrapped-up in and around the question I ask myself in this context of toxification, How afraid should we be?—while, I realize that is not the only or even the ‘best’ question—it is one I think is rich with heuristic value to pursue.

My First Thoughts and Question(s)

If I (or any fearist) puts themselves into the situation of answering this question, several things arrive to be clarified, if not answered with a powerfully thought through rationale and direction:

(a). in concrete, if I am teaching and/or advising the teaching of say “climate education” today (as it is sometimes called” and, I am also answering to the critique “Climate Education is Screwed Up” as a recent video announces [5] – I am also having to answer philosophically and pedagogically how afraid should the students of such a climate education (CE) be at the first, in the middle and at the end of the class or course, or lecture? How does “fear” (i.e., fearfullness) enter into CE and specifically my way of ‘best’ teaching CE and/or advising others to teach CE?

(b) what theoretical and philosophical grounds (e.g., philosophy of fearism, and/or a General Fear Theory) can I draw upon to help analyze this questioning and calling as a fearist—and, how might I compare that guidance I seek be compared to some other guidance from other theoretical and philosophical grounds?—and, thus in that comparative analysis how I could make my ‘best’ recommendations to others in CE and/or follow the findings to my own curriculum and pedagogical design in the classroom?

(c) if I was to analyze the already prevailing general critique (since the mid-1990s) that is substantive amongst diverse critics of a growing “culture of fear” phenomena –a critique that at times takes the provocative label by some writers as “Are We Scaring Ourselves to Death?” [6]—there seems to be an important point of analysis required (fearanalysis) as to “why” and “how” this latter phenomenon is functioning already and this was showing itself (as a symptom) in a historical time when “climate” and the crisis around “global warming” were there but only minor in the zeitgeist of planetary consciousness—at least, it was much less than it is today and in the last decade of the 21st century’s unfolding... then, to analyze this I have to bring forward problematic issues that are in that particular historical discourse, and then bring them into light of my own search in (a.) above and ultimately to answering (b.) above.

No one has pursued, to my knowledge, this kind of in depth research project that (a.), (b.) and (c). involve—and, the time has come for this work to be done, and the sooner the better. It will take a dedicated number of individuals and a team (perhaps) to do a good job of this and prepare the material for publication. I’m inviting interested researchers and thinkers to consider my proposition. I myself have already begun this venture, however, I am only in the very early stages of organizing and designing how to proceed. It would also be great to acquire “gifting” and “funding” supports for such an initiative.

[2] Excerpt from April 25, 2019 FM blog (which Desh Subba and other fearists endorsed enthusiastically).