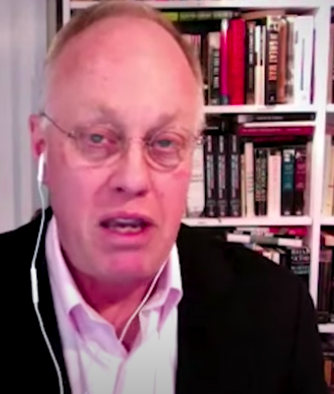 In a recent interview Chris Hedges declared with total confidence, based on all his years of following political revolutions around the world, that only a politics of fear is the solution to the current oppression by the governmental/corporate/military eltes... and, in particular he talks now a lot about the situation in America.

His exact phrasing for this, and it is one I have heard before from Leftist revolutionaries and Rightists as well... boils down to their own political philosophies of change and reform. Hedges said in this interview that "POLITICS IS A GAME OF FEAR" -- and he implied overtly that anyone who doesn't think this is true is deluded. And, he would also more or less say, anyone who thinks they can over-turn the corruption of governments like in the USA, and thinks they can do that without 'weaponizing fear'... well, he would conclude they are naive and mistaken. Worse, he would argue, that such people who do not see or wish to play this "game of fear" --and using fear to bring down the elites in the Capitol... well, then they are people who add to the problem of the oppressed and are not liberators at all. By the way: near 40,000 people have listened to this interview with Hedges and I'm wondering if all of them are attracted to Hedges as fans because he promotes 'weaponizing fear' --another form of fearmongering(?) Now, that really has me concerned if that is the case. I think it will lead to dangerous consequences on many levels if it carries out into a Fear War. And, it quite likely can--as such a war is already well going on but it could inflate and become much worse and very soon as the crises of 'the people' grow in desperation with the pandemic and all the other economic problems (especially, in the USA right now).

Of course, because I am a supporter, philosopher and political-educational activist myself, and one who is not in agreement with 'weaponizing fear' for any systematic or ideological reason, no matter how it is justified--there is a huge "clash" here between Hedges and myself. I could elaborate that more, if you folks on the FM ning want to explore it. I'd also be interested to hear your views here, so make Comments on this blog if this interests you.

My challenge is to all those who think, write, philosophize about fear(ism) and fearlessness--trully, we have to come to clarify our political philosophies and positions--from the theoretical to the practice, to the critical praxis of being citizens in the world today. Is there any justification ethically, politically, etc. for 'weaponizing fear' and just playing the game of fear as Hedges says we must. He is declaring a revolution that scares the leadership of governments and their allies 'out of power'--and, the longer we wait, he would say, we are then only in commission with that corrupt power and we are aiding and abetting the suffering of the oppressed everywhere. It's quite the challenge and I applaud Hedges and always have for decades, for his courage to speak as he does 'truth to power.' The deeper issue however, cannot be dismissed, and that's the issue--many issues, about how do we theorize the nature and role of fear in this challenge of political revolution?

As you may or may not know, I have taken up this American political scenario of cultural (r)evolution very seriously in the last two years with my research and writing a book on Marianne Williamson, who ran a failed campaign as a 'new' revolutionary leader of the Democratic Party--and, who if successful, could have been President of the U.S.A. right now. That was a very close --relatively close-- arising of a totally new spirit of fearlessness in politics like I have never seen in my life in North America. (see my FM blog on Marianne Williamson and my new book). She is definitely closely moving along the political spectrum like Chris Hedges, but they also have a "clash" and go quite different ways. We as citizens, would do well, to educate ourselves around such political leadership--and, these to political intelligentsia and pundits are very interesting in my opinion.