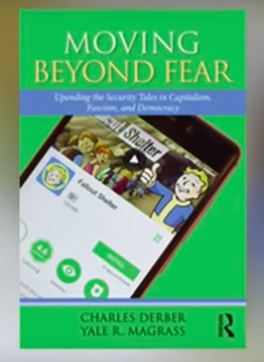 USA political history is one often controlled, unfortunately, by the fear and "security narrative" as Derber says in this interview: https://therealnews.com/stories/fear-mongering-and-capitalism-a-recipe-for-fascism-1-2

According to the sociologist, Derber, "Fear Mongering and Capitalism" is a recipe for fascism, more or less, and the USA is in some ways heading down that direction, especially with their new president. Derber points out this is not just a Trumpian phenomena or new, but that since the late 1960s several social and psychological and economic (corporate elite) forces were brought together to begin the "New Right" in USA history--and a mobilization of capital in the hands of the few and the buying-off via bribary, more or less, of the governance of that country. Construction of fear is a decidedly essential component--and, its a fear both internal and externalized, which shapes the way American policies and actions proceed in government and many parts of the society--domination is a fall out of that and is also part of the creation of an exceptionalism that "holds" the society together against constructed "enemies" that the elites keep people in fear of rather than allow people to critically assess what is happening and how they are being distracted to such "enemies" when the worse enemies exist in the hierarchical structure of the American government-corporate-military-industrial complex itself. It's a good interview worth listening to (2 parts).