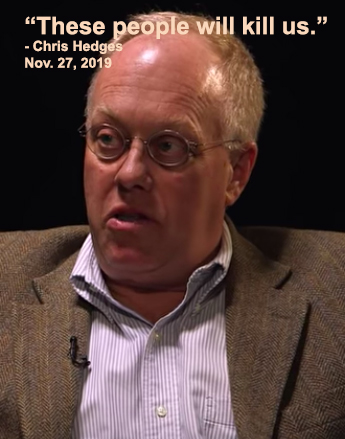 Hedges, certainly a radical leftist, is talking here about elites (especially in America today) who are "psychopathic" in his view (and he is not the only one saying this), who will destroy (and self-destruct) because that's the end result of their fear-based ideologies and 'end game' tactics--of complete loss of their humanity for their beliefs... irrational as they may be--they will be put to work rationally to destroy with violence of no limitations. They will kill all "life" on this planet, is what he is really saying with a straight face. One wonders what this act of courage is in his speaking, it is highly matured on some levels, but is it of the spirit and gift of fearlessness itself?

that is a difficult one to listen to because of the sense of a lot of truth in Hedges' eloquent critical analysis of American society today-- as a Leftist, he is also showing his inability at times to not name the 'enemy' of civilization, that is, "fear" -- he rather calls things "frightening" like some people in power in government and corporate totalitarian ventures but he himself seems to only know how to get people afraid of what he tells them so they will unite on the streets and overthrow everything (the System). I always have such ambivalent feelings when I listen to Hedges, as I have for over 15 years now... I so wish he was more interested in fear and fearlessness in order to contribute to the revolution he calls for and which I see also is required.