Since I put some ideas (a model of sorts) out there on the FM ning in 2016, not much anywhere is being written or published on "feariatry" (Desh Subba's concept) one of the pillar branches spinning generally from a philosophy of fearism (and fearology specifically). See past blog posts 2016: https://fearlessnessmovement.ning.com/blog/feariatry-a-first-conceptual-mapping

The newly inserted "worm at the core" and the letters TMT (for Terror Management Theory) point to the 2015 book by Solomon et al., " The Worm at the Core: On the Role of Death in Life". I am starting to read this and starting with the section called "Cracks in the Shields"--which is TMT's social psychological theory of what is typically at the core of the cracking of the psyche in many mental disorders. I forgot to put TMT in my 2016 'map' (above) and that is because I wasn't thinking of "death" (and fear and anxiety that go with it) when I was developing this 'map' of things that need to be investigated and integrated into a theory that supports the development of feariatry in this world (and, especially, in mental health hospitals). The authors of "The Worm at the Core" wrote, "Psychological disorders are typically caused by a combination of factors, but there is no doubt that death anxiety [fears] plays a role in many of them. As long as people's twin shields against the fear of extinction--a view of life as meaningful, and of themselves as valuable--are intact, they can live their lies with relatively minimal psychological turmoil. Yet some people, because of their genetic predispositions, biochemical imbalances, unfortunate upbring, or other stressful experiences, cannot successfull deploy these shields to quell their worries about death. So they try, often with admirable courage and imagination, to erect their own defenses. Unfortunately, these, 'clumsy modesl of dealing with terror,' as the existential psychotherapist Irvin Yalom put it, often prove inadequate [i.e., pathological themselves]. Dread seeps through the cracks in their shields, and as a result they suffer severely." (pp. 189-90).

TMT is complex, and simple to understand in some ways. I embrace it for the most part, although it is often too (individual) psychological in its main lens of understanding mental health disorders. Subba's philosophy of fearism notion of feariatry ought to include TMT findings and interlink with it, as alliances for healthy mental development. But I find Subba's and TMT's lens inadequate from the point of view of critical social theory, and so that's an area that needs more thought and writing on. I myself, am just beginning to realize that no one really is going to fully 'get' my work on fear(ism) and fearlessness unless they first read and understand my social theory. I have been slow to systematically get that written down and thought out. But it is coming soon. 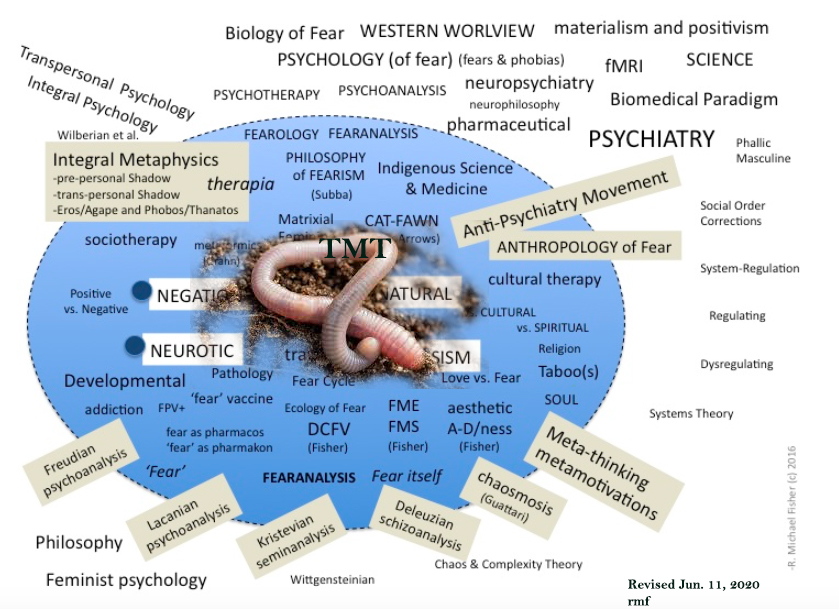