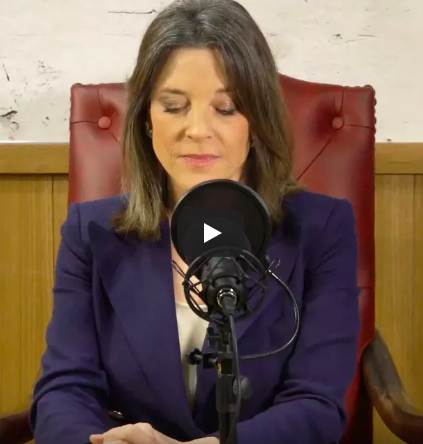 Marianne D. Williamson, (1952- ) is an American spiritual teacher, activist, leader, political critic and Democratic progressive living in the USA. She has been documented historically as an important woman "mystic leader" amongst other icons over the last three centuries [1]I have followed her work for over 30 years off and on, and recently have studied her work and her campaign to run for President of the U.S. in 2020, and have a new book coming out soon on "The Marianne Williamson Presidential Phenomenon: Cultural (R)Evolution in Dangerous Times" (Peter Lang, 2020). As well, my deep interest has been in her thinking and writing about Love and Fear.

Caroline Myss, (1952-) the famous contemporary American spiritual teacher, in a recent interview on Williamson's new podcast, called for a "visionary humanity" that truly transcends the old humanity imaginaries which have brought so much injustice and violence for centuries; Myss acknowledges her friend and colleague, Marianne Williamson in the interview at one point with emphatic tone:

"I really do want to say, that I deeply believe you have made such a dent in the turning point of this country....Even though you didn't make it to the White House.... your message reverberated and I think what you did was, you implanted an archetype, [2] that spiritual consciousness needs to be part of the governmental dialogue, you did that.... you inserted it."

What Myss is saying in general, is that Williamson is fully re-introducing a mature and complex spirituality into the political scene--what Williamson calls a "holistic" and/or "integrative" politics, more practically articulated for the common people as in her latest (2019) book "A Politics of Love" [3]. She is telling Americans (and beyond that), we have to heal our souls, individually and collectively--we have to 'heal the nation' or we likely are not going to make it and the world collapse is near upon us.

In this FM blog, I merely wanted to have one place where people could quickly access the References that refer to my writing and speaking and publishing on Williamson in the last few years. Although this is not the total complete list of my works on her, it is a good starting place to understand why I say I am 'voting' for her, because she is no longer running a political campaign [4] but I am voting for her as one of the best leaders we have today in North America (if not beyond) to guide our societies to more sustainable health, sanity and growth that is in tune with the limitations of our ecological partners on this planet. I salute her as a 'great' leader to be studied and engaged, as you see fit. I think she will improve, mature and become an even greater leader in the future. Although, as I point out in many of my publications below, there is also the susceptibility in her leadership to 'miss' or 'deny' or simply go down a road which I believe will be ineffective to meet her higher aims [5]. Of course, this is all debateable and I encourage dialogue amongst us all to pursue understanding better this leader, and ourselves, and where our societies are going.

My Publications List [all available online free] re: Marianne Williamson

Fisher, R. M. (2020). How to best define 'the enemy: Tips for Marianne Williamson & other emancipatory leaders. Technical Paper No. 113. In Search of Fearlessness Research Institute.

1. "Marianne Williamson, presidential candidate and preacher of the New Age Gospel of Love" (according to Scott, 2020). Scott, L. (2020). An American covenant: A story of women, mysticism, and the making of modern America. Topple Books/Little A. Scott, a journalist, author, activist and mystic herself, wrote this book as a "scathing queer feminist history" of five women who ought not be forgotten "who inspired the nation in their own times."

2. As much as I agree with Myss re: the major contribution of "inserting" a new spirit into politics today, I did not hear Myss in this interview define or name fully the "archetype" that Myss is referring to. I think that is unfortunate. In my book (Fisher, 2020) I have independently from Myss's analysis given a detailed account of the archetype of Williamson but have done so in contradistinction to Trump's archetype (and in dialectical relatonship with him)--as "phenomenon," which I put in ancient mythological terms as "The Twins" (Good vs Evil, Love vs. Fear, Light vs. Darkness etc.). My point is, there is no one archetype (as Myss seems to suggest) that is articulating the current Williamson project in the world, in leadership, and in America. My further critique of Myss-Williamson from this interview is to watch how contradictory their high consciousness articulations are for a 21st century "visionary humanity" and how they operate from a 'gut' expositional discourse as "patriots" (pure and simple American-lovers). What happened to higher consciousness and the evolution of global citizenry as so many great and compassionate evolutionary minds have written about this for hundreds of years. It trully seems Myss-Williamson (as very successful millionaires in American culture) have a 'strange' morality hybridization, which as a Canadian looking on, it has to be called a pattern of deep-conditioning in American exceptionalism (and romanticism). It is this kind of thinking that will hold back, in my view, the maturation of the growth of Williamson as a great world leader but that's not a criticism of disparagement, more an encouragement to be the 'best' she can be. She, like any great leader, needs a lot of support and honest critical feedback too.

3. See Williamson's two overt political books: Williamson, M. (1997). The healing of America [later titled Healing the soul of America]. Simon & Schuster; and Williamson, M. (2019). A politics of love: A handbook for a new American revolution. HarperOne.

4. I am predicting she will either run again for Democratic Party leadership (or some other '3rd' option party) in 2024--and, if not, before then, she'll even run for a Congresswoman position; or she'll be esconced into some position even in the Biden Presidency (if he wins, and at this point in time, polls are showing that'll likely be the case).

5. One of the worst mistakes, is her evolution from calling her opponents (enemies) "sociopathic" as in the current predatory economic system that runs America, to a degrading literalization of people (something she said in earlier speeches in her campaign, and going way back in her spiritual teachings she would not do)--see her recent Twitter (amongst other evidence I have collected on her unbecoming personalizing and demonizing agenda of political leaders):

"The core of the problem is that only a government dominated by genuine sociopaths could have the heartlessness to ignore that much fear and suffering in our midst."