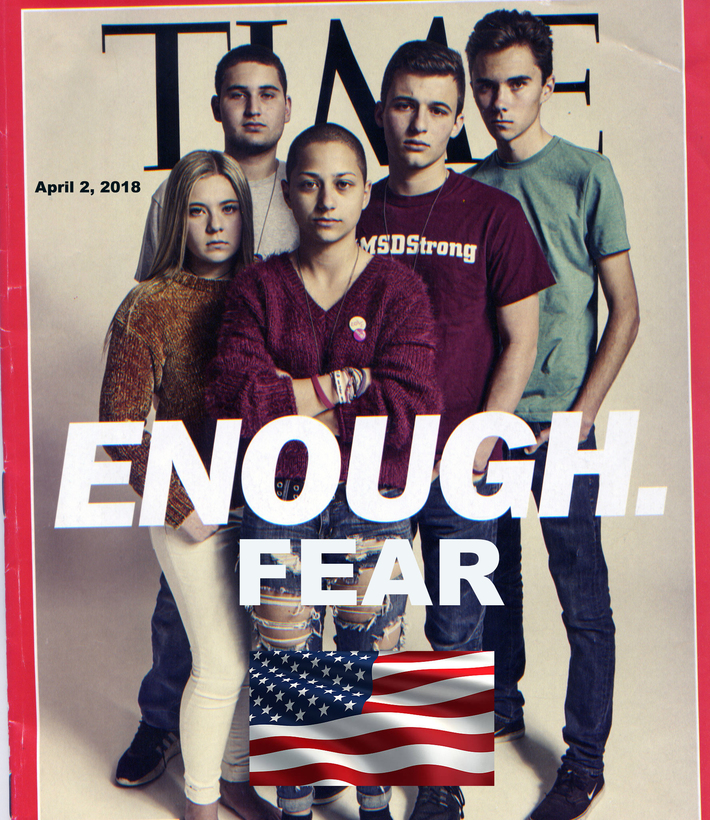 There's a churning of emotionalism and activism in America this year, especially this spring. I have posted a few blogs about youth (mostly in highschools) across America but also around the world, protesting "gun violence" in their schools and communities. They have picked various slogans and hashtags, but the one I think is most telling and interesting is "Fear has no place..." (and the usual term finishing that phrase, but not only one, is) "in our schools." Does this means American youth are protesting in record numbers publicly to say, "We want no fear in our schools? our societies?" --and, why are they not saying they want a "Fearless Society"?

I have just completed a new Tech Paper 76.pdf "Fear has no place..."..": Youth movement for fearlessness in need of critique" which I would love if folks read and gave me feedback. In particular, I'd love this paper get out to youth who are in this movement and may we find ways to dialogue.

Also see Photo I recently posted of the images, t-shirts, mugs and commercialization that has already quickly adjoined itself to the youth protest movement. I very much wanted to see this movement as a Fearlessness Movement (see my blog post "March Without Fear"https://fearlessnessmovement.ning.com/blog/youth-s-march-for-our-lives-is-a-march-for-without-fear

I really wonder where the "Fear has no place..." slogandia started? Maybe some of the readers here know. All I know is that, as a fearologist, this is the last thing to be voting for or marching up and down the streets for. Notice, I am not talking about the "gun problem" these young people are also addressing, but interestingly enough it has spread from there, the more concrete part of their activism, to an issue of "fear" (again, see the Internet and all the articles and images that have grown up around this notion of "Fear has no place in our schools" for example.

As a fearologist, and as one who articulates and follows the philosophy of fearism, and philosophy of fearlessness, everything tells me that the narrow and shallow notion of "Fear has no place" is quite the wrong direction to go if we really want to be liberating youth, school cultures, and society as a whole. It's too bad that phrase is a 'viral' catch phrase but perhaps with time and more deep thinking, and informing of the movement by fearologists, a more congruent message can be applied. The basic starting point is not to try to get rid of fear. That is casting it out like a mis-placed thing. Fear is us, as the saying goes. I cannot help but think youth in America have been disillusioned and or so brain-washed in some ways (not all), that they are taking on the politically and ideologically fraught with problems view of the "conservatives" in American culture and politics--that is, with their Zero Tolerance policies and practices. The very discourse (unfortunately) of the rebelling youth today in America is sounding an awful lot like a discourse that is from the elders they have been oppressed by for so long--that is, a Zero Tolerance policy of excluding "fear" from schools and well, where does that exclusion stop. It is ironic that this youth generation protesting is also the most articulate and delightful in supporting inclusion (diversity-- equals difference and the Other). But when it comes to "fear" they are saying it has no place in American schools, communities, and societies. This is a contradiction and a basically 'wrong-headed' strategy and rhetoric.

Again, this short blog is not my full argumentation re: the problem this declaration has brought forward. As a hint, I will say a much wiser declaration or wisdom comes from the elder African-American Black novelist Toni Morrison, 1993 Nobel Prize for Literature--where, she wrote about in her novel Sula on the very importance of Black People (generally, meaning the oppressed) to rather "make a place for fear" where it can be seen, worked with, and "controlled" (re: the character Shadrack in that novel)--and managed because it is known and studied and lived with in relationship because it is real. The African-American experience and guidance here is well worth looking at in terms of its contradictory message relative to the youth message today in America (and not only youth) of "Fear has no place...". Equally, in future writing on this, I'll examine Four Arrows' Indigenous-based theory of Fear [1] and why the native people and their worldview also are wise enough to know that the last thing we ought to be promoting anywhere are places where "fear" is not welcomed! It is rather astounding, on one level, that all the "fear-positive" literature and teachings since the 1990s in N.A. has had little to no uptake so it seems, at least, at this time for this youth movement [2].

I'll leave it here, with the dialectical thought that if one creates "no place for fear" likewise that is going to create "no place for fearlessness" --and, thus I see a lot of emotionalism and bravado in the new activism of youth today in America rather than true fearlessness. But that's not a put down or dismissing of the good spirit that is driving behind their efforts [3]--their peace, anti-gun, anti-violence anti-fear efforts... I applaud their heartfulness to find truth and justice, and yet, I am seeing how woundedness and trauma doesn't always analyze deeply enough the discourse of the oppressors--of the 'Fear' Matrix (culture of fear) that beseiges us all today--including youth in school cultures.

2. By "fear-positive" I am referring to literature from many disciplines and professionals, who have asserted that we need to shift from seeing fear as only negative to also seeing fear as positive, a gift and so on. For e.g., one of the most effective teachers of this has been de Becker, G. (1997). The Gift of fear: Survival signals that protect us from violence. New York: Bantam.

3. On the positive-side, I could argue a "spirit of fearlessness" is motivating their call, their 'truth-to-power' discourse. Another view is that from a nondual standpoint argument that could be made, as a colleague Luke Barnesmoore makes generically in an unpublished essay "Fear and Fearlessness" (in his larger collection of essays "Nomadic Exploration of Critical Pedagogy") that: "I seek to emulate the Divine out of loving respect, not fear (which is a product of the potential for the Divine's privation in manifestation and has no place, in and of itself, in the eternal" (p. 7). Barnesmoore's argument is one from an absolutistic philosophy (spirituality) or what he calls the "Natural Worldview" of the "Nothing-Infinite Eternal and its emanations Force, Form and Consciousness" whose attributes inlcude Love, Truth, Reality, Beauty, Goodness, Unity, etc." Thus, arguably, one could take such a metaphysical principle and say that there may be wise truth practical and value in the rhetoric of "Fear has no place..." that the youth in America are manifesting in their own way, consciously or not. See Barnesmoore, L. (2018). Fear and fearlessness. Unpublished paper. A self-identified San Franciscan (California), Luke is currently a doctoral student in the Geography department, Co-Founder/Director of the UBC Urban Studies Lab, at The University of British Columbia, Canada.