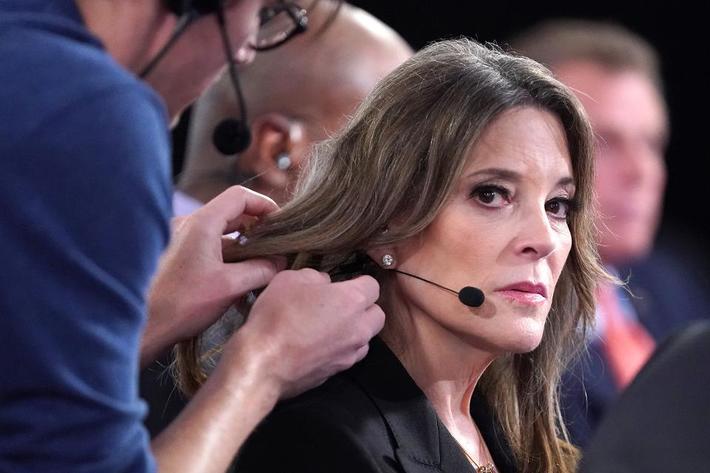 Above photo: x-Democratic candidate for 2020 US President, Marianne Williamson

I suppose every great leader, under pressure, under fear, and with corruption of "power" and "privilege" and media attention and ... you name it, their own personal pathologies, is eventually to show their weaknesses, contradictions and inconsistencies--and Fall. A great critique by Rob Asghar (2020) just came out in Forbes Magazine in which he tells of his experience being a 'student' of Williamson's since the late 1980s--where he really found she helped a lot of people with her preaching of "love and healing" --but since she went into politics, over time (since 2013 forward)--and now in 2020 when she is backing Bernie Sanders for nominee leadership--it seems she is quickly losing integrity, consistency, dignity--with what she preached all those years and even during her 2020 campaign. Arguably, she's become a disheveled self-justified angry political activist like most all the rest, in what seems a "political radicalism, overlaid with the veneer of her familiar words about love and healing," writes Asghar, greatly disappointed in how she is more interested in political theatre and "political street brawler" --and "political rage." [Addendum: see End Note 1]

As I have researched my book for over a year now on MW's career and political path, it is obvious she would defend herself, as would her acolytes, and say this is the spirit of love, of being a mother, and you're damn rights I am angry, etc. No one is going to put my voice down, and especially because I am a woman. If a man had anger in politics like I do, no one would criticize them and so on... she would have a clever and resonable response to all the critiques I am sure. And some partial truths are within her defenses I am sure. I would defend her too if I thought the critics were way off the mark and/or being prejudice against her as a spiritual teacher or woman, or mother, or political player. She deserves full credit for her leadership and move onto the big American political stage. However, no other candidates, man or woman or trans, or whatever has come out onto that political stage with the same gusto idealism of a "politics of love" as the only way to beat Donald Trump and turn the nation around to a healthier way. ONLY Marianne Williamson has done so because of her spiritual beliefs and philosophy. I wrote a short FM ning blog on her as an amazing emancipatory leader--a Love person--really preaching and politiking to make the world a better place and putting Fear vs. Love to the top of her agenda. Wow.

But when a Love Goddess, which she has been called, and which she talks about women empowered need to be, in her 1993 book on women, etc... there is a big disconnect for many--including myself--when I see her turn into victimhood politics as she has especially run the course of in the last three weeks or more... especially since she dropped out of the campaign in Jan. 10, 2020. It is like once she dropped the veneer and mantle of a "President" image for the people... she became that adolescent-like street fighter that Ashgar critiques--and, I suspect many others will see through the duplicity of her Presidential image and now, her fighting to win, full of her own partisanship and divisiveness amongst the candidates. You can do your own research on her and how she is so divisive and thinks this is 'fun' or something. It really hurts her and her reputation as Ashgar says, and it shows me the veneer of Love and anyone who puts Love into ideology (politics) as the answer to everything--and starts to lose it and show they are under pressure and fear just as susceptible to anyone to drop several levels of consciousness in their actions--the world of politics will do that. I could name also the great leader Aung San Suu Kyi (who promoted Buddhist philosophy) and once in more power now has been shamed by the political international community and has had her own 'Fall'--yes, lots of lessons to learn. I'll end here with Asghar's quote (he's a leadership author/trainer):

"Power may corrupt, but Williamson never even attained [official] political power [in the 2020 campaign]. What has hurt her is what hurts many spiritual leaders: The inability in the end to believe what they preach." My point of argument, which I will craft in my upcoming book, is that she may not have got official political Office power and the responsibility that goes with that--and, that made her more a media-power-star with more media coverage and public attention than she has ever been able to garner--and that will allow a part of her to inflate and inflate and use it more and more--because media-is-power in this image-based celebrity world --that is, USA politics!

1. Rob Asghar has written the Foreword for my new book to come out in summer 2020, "The Marianne Williamson Presidential Phenomenon: Cultural (R)Evolution in a Dangerous Time" (Peter Lang, Inc.). Rob starts the Foreword writing, "It has been said that 'the only thing necessary for the triumph of evil is for good men to do nothing.' Some have ascribed this aphorism to the 18th century political philosopher Edmund Burke, others to the 19th century philosopher John Stuart Mill, and it may well represent an imprecise amalgam of their ideas. It has nontheless become a common trumpet call for people of goodwill to enter the political arena. A good American woman courageously stepped forth in November, 2018 with a strong intention to pursue national office in order to address the rising evils she saw in our world: Marianne Williamson, the popular self-help author and speaker, who had spent decades preaching and teaching based on the new-age book A Course in Miracles, was about to attract a good deal of attention in the political arena."