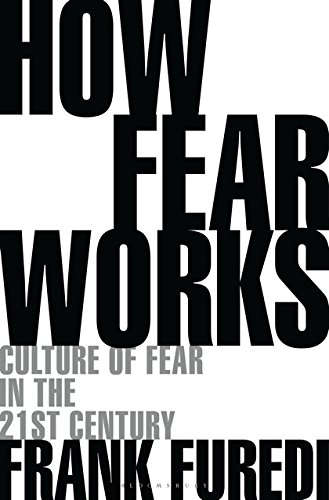 This book published by Bloomsbury Continuum (2018), is by Dr. Frank Furedi, emeritus professor of sociology in the UK. He is one of the leading thinkers and writers on the "culture of fear" phenomenon and I highly recommend this book (and his many others). It raises very important questions as to what kind of society we want to live in and how we can change the direction we are currently proceeding. Here's a small excerpt from the first few pages of the book: I first contacted Frank Furedi by correspondence in 1997 after his first book on this topic and he was gracious to send me some scanned pages of the book so I could study it and it had a strong influence on how I think about fear overall. He's recently taken up my offer to dialogue with him on fear later this year for a possible article we'll co-write for the International Journal of Fear Studies (Issue 3, in early 2020). Kerr says, "We have a negative bias" by which she means, given a choice in certain experimental studies of visual stimuli, most people will pay more attention to a negative (scary) image than a beautiful one. Psychologists have said this for a long time and shown it true in experiments. Now, to assume this is our human nature (or natural)? is another question Kerr does not debate but merely reads Psychology unproblematically, which is the problem I have with her "scientific" bias as a sociologist. That said she does look at the culture of fear in this short video worth watching "The Science Behind Why We Live in a Culture of Fear." go to https://www.youtube.com/watch?v=EQIgToDwL-o

I attended one of her lectures at SIUC some years ago, and I questioned her on her bias in studying fear. She was reluctant at best to engage me. Several emails later, and trying to have a good quality conversation with her and for her to look at my work, she ignores all contact. Too bad. I wonder what she is afraid of? From what I can tell she has built her growing career (and income) as a "horrorologist" of sorts, in that she likes to promote the good things that can happen when people enter into fearful experiences, like at horror shows and extreme sports or entertainment events like horror houses (that was the topic of her dissertation). I am very critical of all of that in ways she isn't.

In 2007, the well-known sociologist of fear (in the UK), Frank Furedi, published a catchy article in both the prestigious American Journal of Sociology 32, and on his own blog site "Spiked" online. The title: "The Only Thing We Have to Fear is the 'Culture of Fear' Itself" (which is obviously his play on U.S. Pres.  F.D. Roosevelt's quip from 1933). I have followed Furedi's work on fear since the late 1990s. This article in 2007 (10 years ago) still speaks well to the phenomena that is going on today around the world, but especially in the UK and USA (even Canada): here it is: Furedi pdf

As far as I can see over the years, and from my correspondence with Furedi, he has utilized much of my research on fear to expand his own work but never once has he cited my work. I have virtually always cited his work since the late 1990s. Anyways, despite that unfortunate turn, I agree with lots of his notions on fear and disagree with lots too. He's a sociologist and not transdisciplinary enough for my liking when it comes to the complex Fear Problem.

That said, I really like what he says in this 2007 article: "Fear is often examined in relation to specific issues; it is rarely considered [in academia and social sciences especially] as a sociological problem in its own right"--leading, he continues, "to a stituation where people are talking about fear (and risk, etc.) and doing so via "under-theoritisation of fear." Right on!