"...the [research] findings show that how we choose to deal with our fear, critically depends on our cultural worldview" - Bobby Azarian (2020)

"We have an existential threat on our hands, our Left-Right divide, I believe, is by far the most important divide we face....This is the urugent need of the next 50 years." - Jonathan Haidt (2016) [https://www.youtube.com/watch?v=D-_Az5nZBBM]

Dr. Bobby Azarian, cognitive neuroscientist, has put together an excellent basic video on the social and cognitive science research that can help explain why "fear" is at core the factor of political, religious and other forms of polarization in social systems. He has worked with the Terror Management Theory (of Ernest Becker, et al.), whereby in this video he takes us through a rapid teaching of major issues and findings. He offers, interestingly, a "cosmic perspective" as basis for a worldview that will be an anti-dote to the polarizing and violent course that American society and a lot of the world is heading down--including the direction toward fascism and authoritarianism, etc. I highly recommend Azarian's (fast-lane hyper) teaching video: https://www.youtube.com/watch?v=ZvMkz1wy6_U

[Note: as much as Terror Management Theory and neurobiology of fear, and cognitive sciences offer an important direction of knowledge to combat the effects of fear as an emotion/feeling (i.e., a response to threat), I have always questioned how these disciplines and fields of study have not really added much at all to reconceptualizing fear (or 'fear'), fearuality, fear management/education, fearism, etc.). I think there needs to be a lot more dialogue between these knowledge domains and with Fear Management Theory as I promote, then more potent combinations will inevitably lead to a better "fear education" for the 21st century. ]

Azarian apparently has been researching a good deal on "fear" in political orientation, along with many others, it is a vast field of research which I support in general. I found this following article a good one to challenge stereotypes (I offer an excerpt only with link to the full article):

Liberals don’t get conservatives. New York University psychologist Jonathan Haidt, formerly a liberal himself, showed how much more liberals misunderstand conservatives than vice versa. And when they get conservatives wrong, often it’s by saying we’re “afraid.” Irrationally afraid, even; in fact, we’re “driven by fear.” They’re wrong: conservatism isn’t about fear. But they keep repeating it anyway.

Take the Psychology Today article, “Fear and Anxiety Drive Conservatives’ Political Attitudes.” (I just love it when they portray us in such a healthy light, don’t you?)

“This tells us that liberals more often seek adventure and novel experiences,” says Azarian. “Conservatives, on the other hand, seem to prefer a more ordered, disciplined lifestyle.” Okay, I get that there’s a difference there. I’ve got several questions, though. (First rule of reading science journalism: Ask lots of questions.)

First, why weren’t fear or anxiety even mentioned in the original research report? (They’re brought up briefly in the literature review section, but not where the current research was discussed.)

Second, what about the thousands upon thousands of conservative Christians who take mission trips to less-developed, often deadly parts of the world every year? How is Azarian going to explain this “fear” to them?

How on earth do planning, orderliness and discipline equate to fear?

And third, based strictly on Azarian’s article alone, how on earth do planning, orderliness and discipline equate to fear?

Conservatives’ dorm rooms only reflect fear if fear is what you’re looking for.....He tells us that MRIs show that the amygdala, a fear-related brain region, is larger on average in conservatives than in liberals. “It is possible,” says Azarian, “that an oversized amygdala could create a heightened sensitivity that may cause one to habitually overreact to anything that appears to be a potential threat, whether it actually is one or not.”

[Note: my own take as a fearologist is that it will generally be a fallacy of fear-mongering if either side of the political spectrum is caught in a 'game' of 'you have more fear; no, you have more fear' --etc. I have labled this the Fear Wars, long ago. This is where fearology can contribute a whole new perspective on that 'game' (dead-end) and truly lift the dialogue to include the typical fear(s) talk which is valid but take it to a new level where polarization can be dissolved in more potent ways, theoretically... that's a much longer conversation but involves my own (amongst others) work on a fearlessness psychology] I am pleased to introduce the social psychology researcher Dr. Pelin Kesebir who has for several years been studying fear (e.g., anxiety, terror, and role of culture as a buffer to death anxiety); and has acknowledged in recent correspondence with me the critical importance of "fear" in societies overall. I included the above excerpt from one of her articles (2014) in J. of Personality & Social Psychology 106(4), 610-623. To read full article A Quiet Ego.pdf

Note: Kesebir is inspired and researches generally under the Terror Management Theory (sub-field) in social psychology, an area I have respected and cited in many of my own publications for decades. Very important empirical research is offered in TMT that supports and critiques the way we engage with fear (and its management). I look forward to more conversations with Dr. Kesebir and may all Fearlessness Movement ning members perhaps find time to read some of this work and comment. For more info. from Dr. Kesebir, contact: kesebir@gmail.com 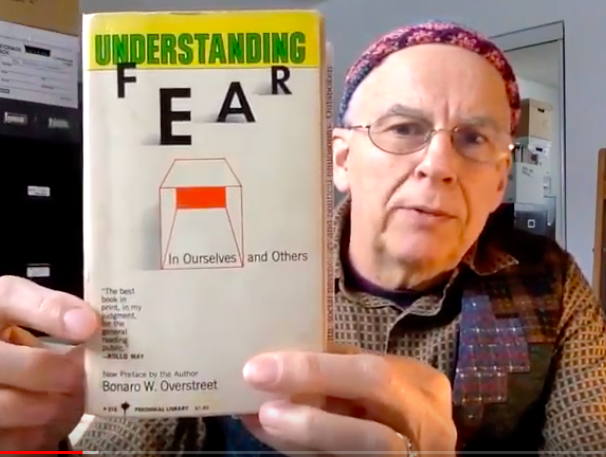 Dr. Sheldon Solomon, social experimental psychologist (re: Terror Management Theory = TMT)... is one of several very important researchers on "mortal terror" (i.e., fear of death) as the universal ("proven") core of all malignant human behaviors individually and collectively--at least, that's what has been suggested by TMT research and the existential philosophy behind it for the last 40 years or so (thanks to writing of the late Ernest Becker). I have followed this work off and on and found it very insightful and yet to be truly tapped in 'Fear' Studies ...

I recommend going to this video talk on the dim future of humanity ahead (unless we solve the Fear Problem): https://www.youtube.com/watch?v=wuJhD5TkX-0

Note: I agree with much (not all) of TMT... much of the basis of TMT is supported, I'd argue in the philosophy of fearlessness (Fisher) and philosophy of fearism (Subba) and philosophy of fear (Eneyo) and others... I agree with TMT in its depiction and theory (supported by a good deal of cross-cultural evidence) that "culture" is a fear management strategy overall. In my Fear Management Systems Theory (Fisher, 2010), I give this more differentiation based on v-memes (worldviews) theories in Spiral Dynamics integral (theory).