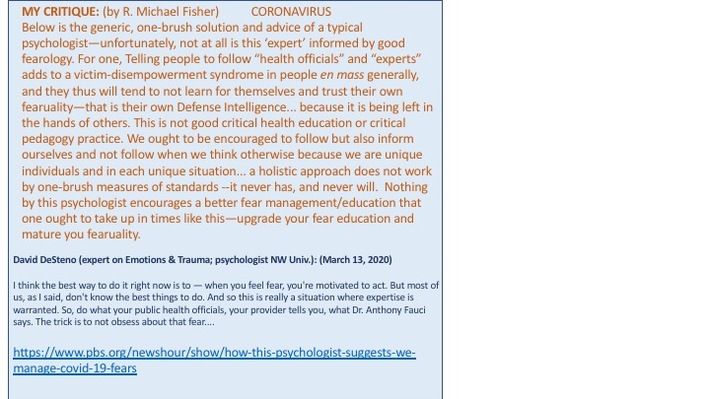 So there are many issues I am critical of when any Authority assigns itself to "protect" the people (often, meaning, protect the State power/authority/order): it is political as well as a psychological situation re: our health as citizens. Long ago researchers have shown that "shock doctrine" policies and "crisis" politics is a big power/business construction that is manipulative of people, mainly by using their fear and inserting (more or less) forms of authoritarian propaganda to add to the hypnosis of the moment when people are scared/terrified etc. There is basically a danger of transgressing (excessively) human rights in these situations of declared "emergency state" or "pandemic" etc. See one author who has snooped this out already around the coronavirus... https://nationalpost.com/opinion/marni-soupcoff-outbreaks-are-not-an-excuse-to-trample-on-our-rights.

As critical citizens, we have to be questioning of all Authority, no matter in what situation. One doesn't have to be a conspiracy theorist but one has to be vigilant to oppression that is subtle and systemic--and has been historically used against people's freedoms. For more background on mis-uses of "emergency time" constructions by Authorities and repercussions, see the great book by critical pedagogy Henry A. Giroux (2003). "The Abandoned Generation: Democracy Beyond the Culture of Fear" (NY: Palgrave/Macmillan).

I am taking a fearanalysis perspective to challenge the ways we talk (or write and teach) about fear. This is embedded in an underlying context of a philosophy of fearism (Subba, Fisher) and thus is more philosophical than psychological. I'm currently writing a journal article introducing fearanalysis as a critical methodology for cultural studies and education.[1]  A small section of the article lays out a minimum of nine precepts one would have to in whole or part agree with to begin a learning of the basics of fearanalysis. Of course, one may not be so willing to entertain these and argue against them. I would at least like a person to engage them seriously and enter dialogue around them with me and/or others, especially to engage those who claim to be fearanalysts (of which I am, unfortunately, at this time one of a rare few).

Let me give the first two precepts for fearanalysis I wrote down in the article and then enter a discussion, using an example I found recently on the Internet of a coaching practitioner talking about fear. It could be nearly anyone who might say this kind of thing about fear, and so I have no need to name them. I have seen this type of talk a  hundred times in my years of researching "discourses" on fear.[2] Again, I come with a specialized fearanalysis perspective to the topic of fear and how we talk about it, which is a scholarly and theoretical perspective, where understandably not all practitioners have that specialization or scholarly interest. Rightfully so, practitioners are hired for pragmatic tasks by clients and want to be "effective" at what they do. I love to work with practitioners, I too am one as well, and see if I can assist them to expand their practices and become more conscious of how they talk about fear.

At a minimum, in order to understand what fearanalysis is based on, the following nine precepts are core (not the only) foundations:

(a) avoid the habitual over-emphasis on discussion of fears (i.e., fear of x, y, z), phobias, etc. and conflating this knowledge with understanding the nature and role of fear itself and the even more complex conceptualization of fearism

(b) ensure multiple perspectives are examined on the topic fear, interdisciplinary, including populist accounts, but preferably transdisciplinary is useful

Two Examples of a discourse on fear that falls (somewhat) short of the criteria above. I quote from an Internet blog by a contemporary practitioner (coach/trainer):

1. "The sub-conscious mind is the home of those fears that are largely unconscious and which are driving up to 95% of our behavior. Trust me when I say that, after coaching hundreds of individuals, the fears are within all of us. I'm not good enough, I'm going to be found out, I don't fit in are just a few that simmer below the surface of our existence.... [and often, due to guilt, a cousin of fear, people would rather not face this truth] "I see it all the time, never more clearly than with 'spiritual' types... those who want to ignore or escape from the deepest shadows of fear by putting on a religious or spiritual facade. I understand. I, too, can adopt the facade. You see, it takes courage, tremendous courage to look at the fear. And then we discover that it truly is illusory." [bold added for emphasis]

[The above quote indicates the topic is circulating around the "sub-conscious mind" which is interrelated, rightfully so, to "the deepest shadows of fear" and yet instead of focusing on fear itself and a more complex conception of fearism, the primary text emphasis is on fears (fear of x, y, z) etc. What is most promising is the interest to explore the sub-conscious, unconscious realms of awareness and unawareness, which is where we will come to have to examine fear itself as the topic and begin to see that all our fears individually and collectively, are still "fears" and thus not all that useful, other than as surface symptoms, for understanding the dynamics of fear itself and fearism dynamics which are less visible and knowable at first but with good fearanalsyis (even psychoanalysis) can be revealed and be seen to be themselves symptoms of even greater unconscious realms of what I call the 'Fear' Project or 'Fear' Matrix, "culture of fear" etc. ]

2. "I 'get' what you mean about two different ways of using fearism [3]... at least I think I do. To use some cliche's, there are always two sides to a coin. Nothing is all good or all bad. No matter how you flip it, a pancake has two sides. (I can digress.) There are some fears that serve us in a healthy way; others are destructive. The most destructive are often buried deep within the subconscious mind, driving our behaviors despite our finest conscious intentions."

[The above quote indicates a reasonable first off-the-cuff interpretation of how Subba and I use fearism, however, it then slides into cliche's and that will in all likelihood lead to misinterpretation somewhat, as is the case above in its brevity of analogies. I am very familiar with the dialectic nature of the philosophies in Taoism and other nondual forms of thinking, yet, the common maneuver of a psychology of fear discourse is to quickly drop the philosophical part of the framing of fearism which is a good start of possibilities, then to reduce it to "fears" in making the analogy the author wishes to validate. This is chronically a problem I see where there is a categorical error enacted philosophically by taking a very complex construct "fearism" (in this case) and reducing it not only to "fear itself" (which would be less of an error) but then goes all the way down to the simplest construct of "fears." As I said before, nearly every book and article (almost) that talks about fear makes this same categorical error continuously. The error as well based on the two precepts above, is the beginning to talk about sub-conscious and unconscious shadows of fear, and yet the discourse stays within the dominating psychology of fear, and historical, cultural, political aspects (e.g., necessary in talking about fear itself and fearism) are left out. I believe all these tend to inhibit the full-potential of a good fearanalysis. Which is not to say the thinking and practice of such a practitioner and their discourse is unvaluable.]

When we talk about "fear" in any way, realize that when we do so in the public sphere (e.g., the Internet, a conversation, etc.), we are public and thus are engaging in what scholars today call a form of "public pedagogy." Typically, if not trained to thinking critically about our pedagogies, then we can spread knowledge very rapidly in the public and digital worlds without always thinking so carefully about what we are actually teaching and what that teaching (and its "discourses") are actually doing. For a fully ethical practice of public pedagogy, especially on the topic of fear, I propose that we begin to examine the problematic of switching categorical differences in knowledge about fear-- and the most basic way is to acknowledge the increasing complexity of holarchical order of constructs from fears to fear itself to fearism.[4]

1. The journal article is entitled: "Invoking Fearanalysis: A New Methodology Applied to Wicked Problems and Paradigm Shifts in the Anthropocene."

2. "Discourse" is a particular complex construct used by academics in various ways, but it always more or less refers to the way people, organizations, etc. 'talk about' a topic and it can be thus analyzed as a pattern of communications based on a set of underlying assumptions and values, beliefs, worldviews and what are called historical and ideological discourse formations. Point is, we humans may think we are talking about our experience as if it is ours and we made it up entirely and are communicating it as if there are no influencing historical, political, and philosophical sources to the discourse formation. This has been shown to be a naive view of our selves and how we talk. Philosophers like Michel Foucault have well shown how discourses are knowledge-power entities (formations, patterns) that 'stick' together over time in cultures and are used by people to gain certain privilege and power in their knowledge assertions. Typically, they do not know they are carrying these (like memes), nor are we usually aware of how Discourses (with a capital 'D') actually are using us as their agents to pass on certain knowledge in certain ways. I have studied what is called a method of critical discourse analysis for many years now, and it tends to come into all my critiques.

3. This was a reply to my post on their blog about how Subba and I have two different ways of conceptualizing fearism (one more healthy, one not so because it is a pathology).

4. I would include my own notion of 'fear' in that spectrum of complexity between fear itself and fearism.