New Video (35 min.)... where I describe how I am stepping up full of inspiration to enter "politics" (i.e., from the perspective of the political sphere, a holistic-integral approach)...

[companion video recently: The Great Collapse: How Afraid Should We be?]  Note: my play off the term/concept "The Great" [1] has an intellectual history behind it, important for those readers and viewers who really want to understand where I am coming from.

Dr. Fisher talks of how he is moving to make a commitment over the next 10 years to enter the political sphere and politics. He shares his experience professionally as a teacher and differentiates that from being an educator (especially, adult educator). He questions and critiques politics and political figures but also supports their differing pieces of the puzzle toward the making of a great citizen, great society, etc. What makes a process philosophy, thinking, person is explored, and he shows his intention to study the history of transformation in the last 100 years especially and how it is essential to understand what is transformation and its role in the political sphere and politics of which he mentions Marianne Williamson as an exemplar for a holistic-integral approach as she is currently running for President of the USA in 2020. Always asking: "What are we learning?" is key to his educational philosophy and thus "learning to learn" is both a meta-cognitive skill but also the basis for a great learner/citizen and it is essential to analyzing the problems and crises we face individually and collectively. 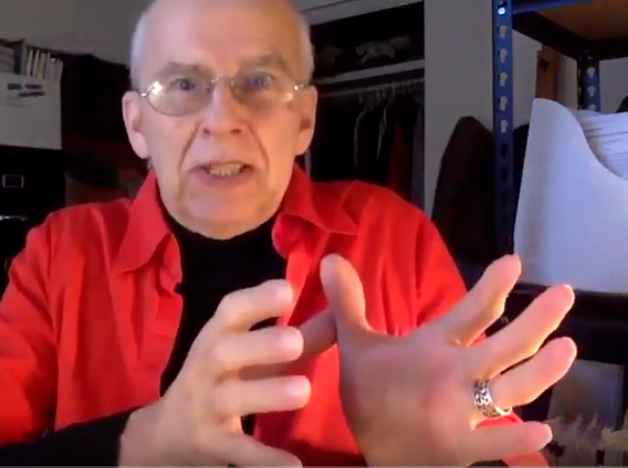 (action still from my video)...

1. The first book and stream of intellectual thought on the telling of 'Big Story' narratives per se came from my encounter in the late 70s-early 80s sometime, and reading the little booklet I ordered from the US by eminent Thomas Berry, the self-identified geologian (cultural historian) at the time, entitled "The New Story" (also a recent video has been put together on this work http://thomasberry.org/publications-and-media/the-new-story-1)--and, much later Berry wrote a critically important work to many in the holistic movement called "The Great Work: Our Way Into the Future" (2000) [2]; but the more substantive perennial philosophy work I read sometime in the early 80s was one that was promoted as foundational in the transpersonal philosophy of Ken Wilber at that time, and it is the classic (1936) book "The Great Chain of Being: A study of the History of an Idea" by Authur O. Lovejoy. There was that sense of "The Great" something, historically, evolutionarily and beautifully articulated, as what Wilber later called the "spirit in evolution" basically. And that's all resonant with my own soul and sensing that there is some 'big picture' (a fav. term of Wilber's) going on that I or anyone could learn about and feel there is an alternative view of history (and the future) than what the straight-up historians (and evolutionists in biology) have been and still were (and still are) painting about the nature and destiny of humans, Homo sapiens, and humanity and human nature, etc. The next in the trilogy on "The Great" works that came to me is David C. Korten's (2005), "The Great Turning: From Empire to Earth Community"--again, much could be said on how important this book and teaching is, and to say the least Korten has attracted a huge following across a lot of different areas, but yes, still within the alternatives movements. To be interested in "transformation" at the core of my process philosophy, politics and education, one has to link these triad or quadrad of influences to my work to make sense of what "transformation" means to me. And with a little research there are others who have their own versions of The Great Turning, e.g., a very important leader, and Buddhist eco-activist, Joanna Macy, https://vimeo.com/191169785 ;

2. "Great Work" (i.e., magnum opus) is a term with spiritual-philosophical rooting that apparently goes back to ancient Hermetic (esoteric) philosophy, at least, as a legacy and tradition of thinking about the reality and future reality that the human and consciousness is participating in, and can shape and can be shaped by.