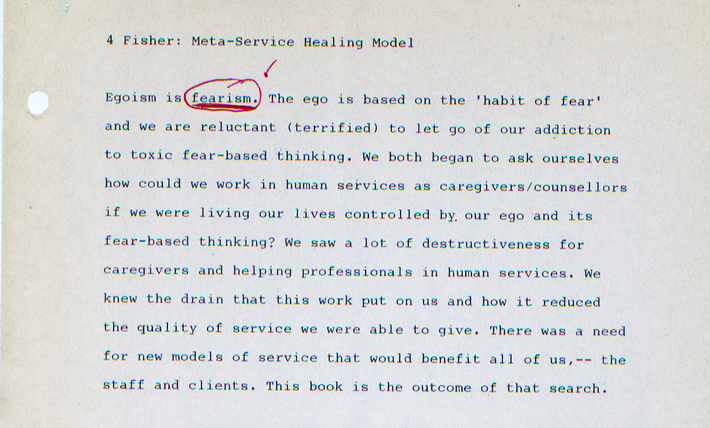 HISTORY OF THE COINING OF "FEARISM"

The newest discovery of the first use of the term "fearism" came the other day while I was searching an old book ms. never completed or published. The date, Sept. 10, 1990, it was entitled Journey Into Fearlessness: Towards a Meta-Service Healing Model" and was part of my first year of writing and publishing on fear and fearlessness post-In Search of Fearlessness Project (1989 - ). The excerpt (Figure 1) makes an interesting claim and choice of words: "Egoism is fearism" (p. 4). I have included here the entire Preface Fisher Meta-Service Healing Model 1990.pdf from which this excerpt comes from, showing my deep connection at the time to understanding the nature and role of fear in the field of human services, of which I and my partner at the time (and co-founder of ISOF Project) were working in the field and researching as young scholars wanting to improve things. This was my third career, after my first in ecological and environmental biology, and second in education.

Although, in re-reading this Preface (above) it is clear that I was imagining this expansive conceptualization (and theory) of "fear" as "fearism" just like of "ego" as "egoism," there was no further use of the term in my ms. at that time. However, often the text and thinking in this ms. indicates I was using "toxic fear" (amongst other such expressions) and referring to fearism, more or less. Note: Desh Subba's coining of the term "fearism" in 1999 in his literary work and later philosophical work is not quite the same as my early uses. When I connected with Subba in late 2014, just after his book Philosophy of Fearism was published and transl. into English, we then corresponded and I joined my views with his views somewhat to enable the East-West emergence of a "philosophy of fearism" as one philosophy with many branches (see our book in 2016 Philosophy of Fearism: A First East-West Dialogue). Subba and I agreed to use fearism-t (toxic form), to distinguish from his generic coining of the term in 1999, to refer to the earlier pre-Subbaian coining of fearism and what has followed as use by many authors in scholarly work since [1].

1990 - (Sept. 10), Fisher (Canada) uses the term in one sentence, linking it with "egoism" and a "toxic fear" formation with ideological overtones in meaning but nothing more is written specifically by him using the term "fearism" again until 1997

1997- Fisher (Canada) used it once referring to it as a "social dis-ease" in his unpublished Spectrum of 'Fear' book ms.

1999- Subba (Nepal) uses the term in a literary ms. and then develops it into a full-blown philosophy

1. For an inventory of uses of "fearism" by scholars, the latest update is Fisher, R. M. (2017). "Fearism": A critical analysis of uses and discourses in Global Migration Studies. Technical Paper No. 64. Carbondale, IL: In Search of Fearlessness Research Institute.