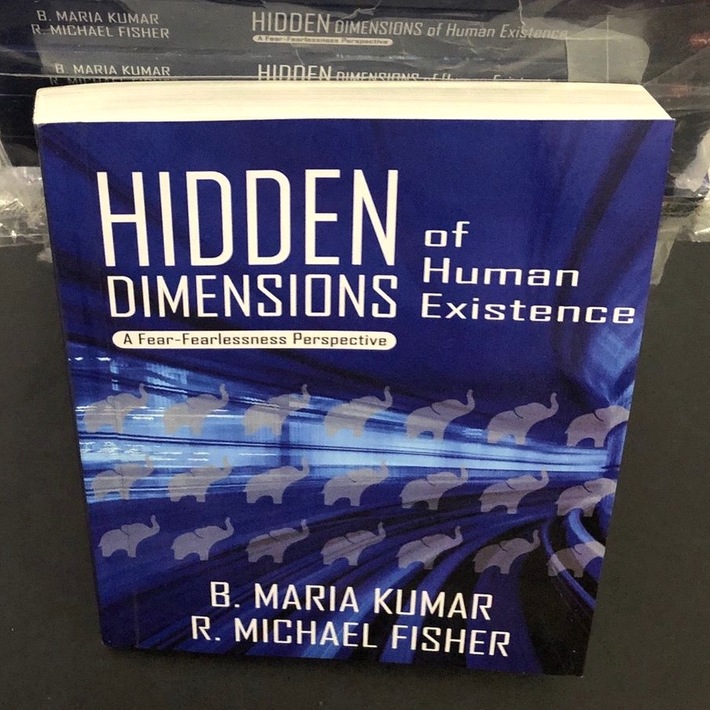 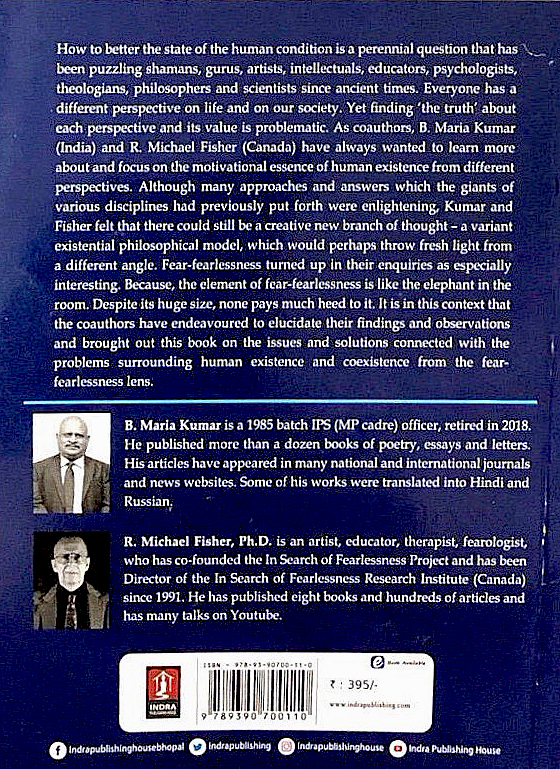 Glad to announce this new book, initiated and led by B. Maria Kumar and most of his essays, and I respond to them. (Indra Publishing House, 2022)

I think readers will find us as two fearists in a creative exchange that was a lot of fun for me to be involved. One may even learn something new about the "human" from this book.

I appreciate being notified of this book by Dr. Randy Auxier, philosopher at SIUC, as he informed me that he was reading Moreno and found the first two chapters to be all about fear at the base of the human condition and of reason itself. Moreno (1971/77), a political philosopher (Mexican-American?) wrote, "Fear is one of the fundamental motivating forces behind our actions. The history of [hu]mankind is to a very large extent the history of our attempts to deny, repress, or escape from fear" (p. 1). "The fear resulting from our ability to reason [i.e., awaken to uncertainty and our own vulnerability] affects us so profoundly that it permeates our whole existence. This fear, which we struggle to suppress...never [completely] abandons us..." (p. 6).

FEARISM: Roots (Precursors) of a Philosophy of Fear

Although Desh Subba points to several sources of theories and philosophies in his 2014 book [1] that somewhat point to the central importance of fear, Subba is not able to find any distinct "roots" that satisfy him that the "philosophy of fearism" (he coined) has a forerunner. This makes philosophy of fearism a unique creation for sure and that is worth celebrating. However, it also makes me question as to whether there are not indeed "roots" (forerunners) that already existed before 1999 and Subba's subsequent development of fearism. I am currently writing on this topic. It seems there are some authors, and Moreno (1971/77) is one of them, that may indeed be precursors to a philosophy of fearism. Because I just got this book in the mail today, and haven't read it, but only read reviews of it, I'll keep you all informed of my findings--but the two quotes above by Moreno are indeed compelling evidence that Moreno was "onto" a form of philosophy of fearism nearly a quarter century before Subba's fearism notion arose.

All fearists, of any scholarly pursuit, will want to look at this little book (129pp) from the 1970s, from an original thinker--not because he identifies fear as at the source of distorted thinking "but in locating the root of fear in reason itself" --that is what makes his philosophy of uncertainty (i.e., of fear) a unique and important and courageous contribution (quotes from Michael A. Weinstein, in the "Introduction"). Such a claim by Moreno is going to really challenge all the "rationalists" and believers in "reason" as the best way to manage fear. Moreno seems to be turning that common and dominating thesis upon its head.

As I read these brief comments and quotes, at this point, I am strongly sensing Moreno is a precursor philosopher (from the political field) who sees through, and sees beyond fear of fear itself--and moves forward to articulate a philosophy of the human condition where fear is central and it is this fear that is the glue that links Reason and Faith--it is fear that is in between Reason and Faith (the psychic and cultural (and intellectual) defenses of individuals and collectives that try to repress fear and its impacts; that try to deny fear is central but prefer to put reason and faith first and central).