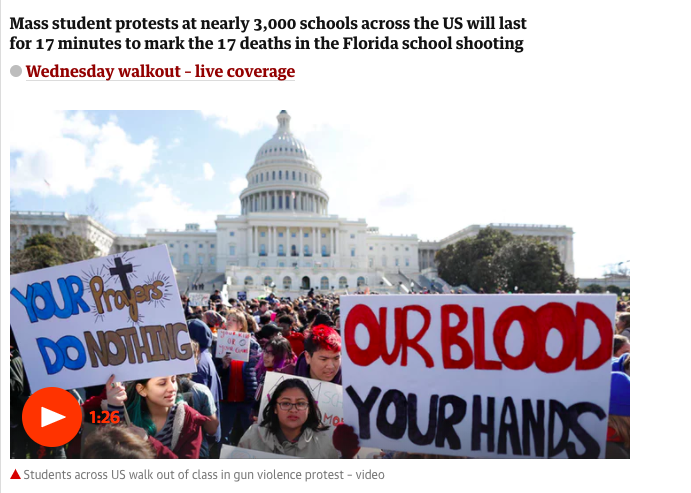 As The Guardian Newspaper says about this protest in the US earlier this week:

" [Student] Demonstrators hope to maintain a sense of national urgency around the need for gun policy reform, in the wake of the deadliest mass shooting at a US high school." And, the basic walkout was 17 minutes from their regular classes, as organizers of the demonstration want that to be symbolic of the 17 youth gunned down in the Parkland, FL school recently.

I would call this great! I'm glad youth are taking action in public. I'm glad they are challenging their politicians through civil action. I also watch as a fearologist the entire event. And, nowhere can I find easily that the students or the organizers, or the media that are reporting on their civil action, that the students are learning more about fear management/education. I've always said the Gun Problem is a Fear Problem. It's too bad that message has not been included in the protests and the media coverage of the protests, and it reminds me, sadly, of how far away we are with dealing with the real root of the problems of violence! Dr. Jonathan Metzl, a psychiatrist and Director of the Center for Medicine, Health and Society (Vanderbilt University, TN)

I just watched an interview with Dr. Metzl on Democracy Now on the internet, and I know his expertise is very important to the debates, as we now witness the tragedy of another mass murder shooting in a Florida highschool, another one, one of 18 such incidents in the school year so far in the USA.

Most important in the discussion on the program was the impact on society of such events, which Metzl raised as the "broader questions" beyond all the details and symptoms of these mass murders. I heartily agree, as he says, "In terms of what I think psychiatry and mental health can do.... the question that rarely gets asked at times like this is why do we need so many guns in the first place? What kind of society do we really live in and want to live in?....in the aftermath of this people start to mistrust each other, all of a sudden, we need more guns in schools, more armed guards, more metal detectors....this mistrust becomes so pervasive," he says.

And, yes, mistrust only can register and grow like a virus damaging the social fabric (i.e., sociality and social trust) if fear is rampant and spreading like a virus. The word fear was not actually mentioned on the entire story Democracy Now covered, or in Metzl's dialogue. I think this is where feariatry (as one of the branches of fearology and the three pillars, in Desh Subba and my books) comes in... we will not get to the roots of what Metzl is concerned about without a serious study of the Fear Problem, as more important than the Gun Problem, and that whole shift would really give us a chance to ask what kind of society we live in and want to live in. Since the mid-1990s these issues have been brought up with the documenting and naming of the "culture of fear" problem in America, but fast spreading around the world... and, actually, this label goes back to the early 1980s. So, clearly, there isn't much take-up of the problem, and much really serious public discourse on fear--and, certainly, in my 29 years studying this all the school systems are loath to get into discussing it. We so lack vision in W. society.

Anyways, there will always be more opportunities, and unfortunately, more deaths... more guns... more mistrust and more fear. Feariatry has to be brought up to help inform psychiatry (and mental health) at all levels. I have written on several of the mass murders about these things for years. So far, no one really is listening too intently and rather people follow the fear trail... and look who to blame ... a point Gavin de Becker made back in the late 1990s as he studied these issues as a security expert... yes, change is very slow. Though, one cannot predict the future totally by the past--thank goodness, otherwise, I'd be motivated to say, "we're fucked!"

Some two and 1/2 yrs ago I did some writing and took some political actions re: the Fearlessness Movement, my critique of fear management/education and my critique of the culture of fear in America... and especially critique of the way the mass murders in USA are regularly made meaning as a "gun problem" (pro or con)... the nice simple binary. I have selected some of that writing (and a link to an article) I wrote here: http://csiie.org/mod/forum/discuss.php?d=37 (on Dec. 26, 2012, post-Sandy Hook tragedy)...

Now we have the 21 yr. old rebel at Charleston, S.C. killing 9 black people who were praying in their Methodist church.... it is not a gun problem, is what I wrote to the Pres. and VP of the USA in 2012... it is a Fear Problem we have... and the guns only "feed" to the fear... and create more... what curriculum is adequate to the task of the 21st century and these ongoing mass murders (or acts of 'terrorism')... etc.? And with the help of a colleague I was inspired to write a letter and send a copy of my book to the Pres. and VP at the time (neither replied)... the ongoing, silence, and denial-- 'fear' itself (i.e., fearism-t) is well in place with even our best leaders who are too afraid to really encounter the issue of source--- fear itself, by any other name.... It will repeat... these tragedies... until we find a better way to make meaning of them and thus be able to intelligently, from a place of true fearlessness design a different society....