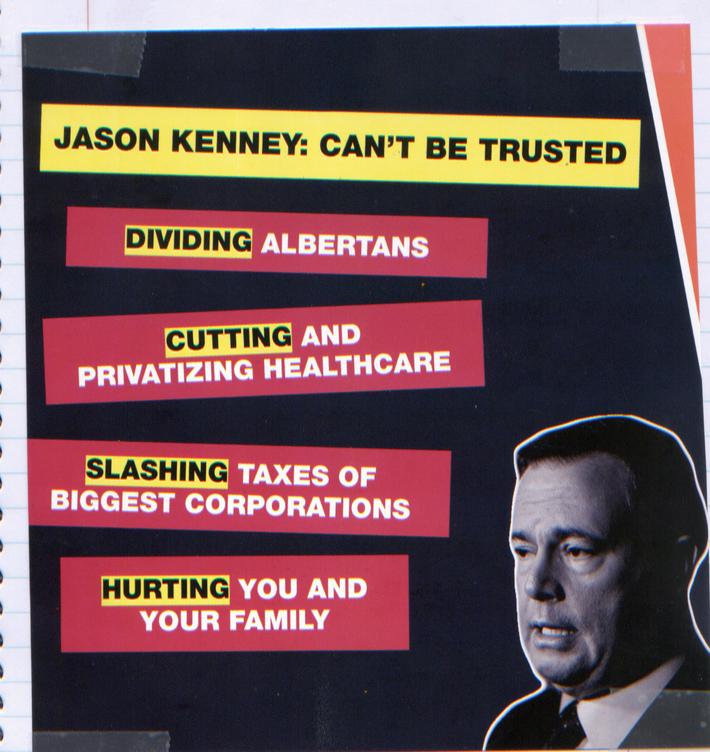 This is the latest electoral promo postcard that came to my door yesterday. It doesn't really matter who the politician is, when they are the opposition, you get this kind of depiction (representation) and derrogatory imagery and words (the yellow boxed words especially)-- and, what you see is the use of fear, violence/hurting, terror and demonization tactics used from the "good side" to create the 'enemy.' Even if I would not vote for the part and this leader depicted, here in Alberta, it is not that important to me as the WAY we do politics and campaigns and run governments upon this kind of culture of fear virus spreading tactics. As if this is going to make for a better political government and operations in the capital city where important decisions have to be made and worked through, like any negotiating, like any conflict process, like any 'family' or organization. This all shows me how demeaning and low and afraid both parties are and their leaders and planners of promo materials... they fall into this immature pit of despair and their own terror of 'losing' to the opponent. They use fear to create fear and try to win votes. This is not only immoral on many grounds, it perpetuates the culture of fear dynamic and its oppressive results and casts that upon all the people. There is nothing positively inspirational in governments making campaigns like this and trying to 'win' votes, and it does nothing for building future longevity of parties and leaders nor a stronger and healthier Alberta. But I know this happens everywhere. It really is immature thinking that's gone into this design and tactic. Let's work towards Healing Alberta not creating more wounds, more hurt, more fear and violence. Sanity is still a long ways from our political parties and leadership, sorry to say. Lot's of corrective work and change required!

Yes, I'll go vote on Tues. in the Alberta election, but I do so with great ambivalence as to why I would vote to support any of the political parties and their leaders in Alberta as they behave in this immature way. I offer my support for all of them to 'grow up' to where they care about real people and care about their role in creating a culture of fear in this province. This is no future, a future of fearmongering, that our children and youth ought to inherit. CITIZENS AGAINST FEARMONGERING is my latest work in the communities in Calgary, as a pilot project through the program call LIFE ENHANCEMENT TRAINING... check in with me if you want to know more about these, and/or see my Youtube Channel, go to "R. Michael Fisher" (L.E.T.) for teaching videos.

Feel free to share other critiques you have of this kind of visual cultural (advertising) that continues the culture of fear virus.

[btw, election results are coming in for Alberta this evening Apr. 16/2019 -- Jason Kenny and United Conservative Party appear to have swept the 'majority']

Dr. Carl Leggo joined the Fearlessness Movement ning (April 24, 2015) a week or so after I put out to a bunch of people on my birthday (April 18) I had started this FM ning in Jan. 2015--he was the 14th member to sign-up, and 5th academic to do so. He wrote one blog in 2018 on his favorite topic "love" and schools: https://fearlessnessmovement.ning.com/blog/carl-leggo-ruminating-on-love-and-schools

He is a significant Canadian educator-poet, departed from his physical form yesterday morning with lymphoma cancer, and an earlier death than one would like; as he had a lot of poetry left in him but his destiny and body were telling him another story, less poetic, less grand, less fun, and much less limiting than the cheers of the human potential movement and new age rhetorics that incessantly call out, and preach, as they do these days-- you can do anything, be anybody  (and, live young forever).... I don't think so!

A memorium to Dr. Carl Leggo... mine, but there will be many from his 30 years teaching... so many students and colleagues that loved him and learned from and with him. Let me start spontaneously with my own initial memorium (perhaps, there will be more and some more formal, perhaps not)... I just want to riff here a bit:

I met him first on UBC campus in his office, led by the contact given me by a professor who said, "You should meet Dr. Leggo?"; the meeting was all upon my initiative going to grad school in Adult Education (a masters) because I was looking for a supervisor for my thesis in the fall of 1998. Expecting good things, he turned me down and said he was already too busy, and he wasn't totally best fit, for what I was into--that is, the study of conflict and its influence in education and society in general. I was going to write a critique is all I knew. How we handled conflict in society I thought really stunk! He didn't disagree but it was not his cup of tea.

Carl Leggo (1953-) Carl Leggo is an autobiographical poet who evokes his nostalgic childhood experiences growing up on the now non-existent Lynch’s Lane, Corner Brook. [Newfoundland, Canada].  Heavily influenced by fellow Corner Brook poet, Al Pittman, who Leggo first heard read in 1972, he, like Pittman, believes poetry should represent and narrate the experiences of people in a language that resonates with the heart’s memories. Born to Russell and Kerry Leggo, Leggo worked as a teacher in Newfoundland for nine years during the 1980s, teaching in Roberts’ Arm, Stephenville and Corner Brook. In 1990, he accepted a faculty position as Associate Professor in the Language Education Department at the University of British Columbia, where he teaches classes in communication, writing, education and narrative research at both the undergraduate and graduate levels. [excerpt from http://www.heritage.nf.ca/articles/arts/carl-leggo.php]

Not always to my liking (I have my critiques), Leggo was (still is) all about bringing "love" into curriculum and pedagogy and graduate research--and love of language into education and life, in the largest sense. A new book dedicated to him and his work was created by some UBC colleagues etc. and his favorite picks--all while he was in cancer treatment--and, just in case he didn't make it. They wanted to honor his years of contribution. I heard about this book from my partner Barbara Bickel, also a doctoral student of Carl's at one point. The new book title:

Storying the World: The Contributions of Carl Leggo on Language and Poetry (Studies in Curriculum Theory Series). NY: Routledge, 2019.

Leggo was my doctoral co-supervisor (with Karen Meyer) at UBC Education (2000-03). I remember he gave me the bad news I didn't get accepted into the program. I phoned back later and challenged that. I thought I was a perfect candidate. He rethought, and said, okay then. Years later, a fun memory of him asking me to take him to the UBC book store art section and help him buy a bunch of visual art supplies because he wanted to learn to use those materials more with his work and he was so inspired by my art and how I had turned my cubby-hole graduate student office into an art studio for my research. He apparently never did much with all the art supplies, but we had fun buying whatever without caution to how much things cost. That's an artists fantasy...

He was the second (and only seriously interested) academic in the field of Education to endorse and study my first major 'real' book The World's Fearlessness Teachings: A Critical Integral Approach to Fear Management/Education for the 21st Century (Lanham, MD: University Press of America/Rowman & Littlefield, 2010). He made sure UBC Education library had a copy for future teachers.

I kept up email correspondence with him for 15 years after I graduated from UBC. He usually always replied to the writing I was sending him, and always encouraged me. I eventually was angry enough to push him to do more than respond on emails and he decided to take on reading my 2010 book and then riff off from it and explore "Love" and "Fear" more specifically, which he did and published that in 2011 in a Canadian curriculum journal, the piece entitled: "Living Love: Confessions of a fearful teacher." (Leggo 2011 Confessions.pdf). I see he picked this article to include it in his last anthology book: "Storying the World"... There's nothing like a good confession, and I suppose I was looking for it from him all those years of corresponding. He admitted in this article two things: (a) my book was an important book for all educators to read and study, (b) thinking through much of what I was saying in that book impacted him to look more honestly... and, his long pursuit of love, he admits, was motivated mostly by fear, which he had not fully realized until he did this inquiry--which, for me was a collaboration project... a coming full circle where not only he was the mentor for me (and others) but I was the mentor for him (and perhaps others who'll read his confessions article)... For further advice on confessions, e.g., see the big A. A. Blue Book: "Step 4: Make a Fearless Moral Inventory...".

My favorite quote (I subversively recorded) from him came during one of my doctoral research committee meetings, when he jumped into the conversation around my work and blurted out: "It is really terrifying to look at a fearless organization." [meaning, in context, he was saying, it was so contradictory to his entire way of understanding and experiencing most of academic and other institutions in society, to imagine what it would look like to have a fearless organization] (quote cited in my dissertation (p. 6), Fisher, R. M. (2003). Fearless leadership in and out of the 'Fear' Matrix. Unpublished dissertation. Vancouver, BC: The University of British Columbia. During my performative defense of the dissertation, and the first UBC 'outside' reviewer spoke, and castigated my entire dissertation (pretty much), Carl followed with my defense: "Now, [long silent rumination], this is a really complex text." [thanks man!]

I got up at 4:30 am and had powerful dreams of being back in the forests of British Columbia. Barbara had a dream with Carl also this night... so, I decided to write this memorial piece and when I went to my filing cabinet what popped out for me was a paper I had written in my doctoral studies years, which in some ways was influenced by my encounters with Carl and one course I took of his on narrative writing/inquiry in research... it stimulated my creative self to stay alive, to keep the artist in my academic work... and, so I'll just let you read these three scanned first pages from a paper I wrote for Dr. Elvi Whittaker, an anthropologist (course instructor for EDCI 572 on Critical Ethnography) in which I wrote fictionally a dialogue, something I love to do, as I wrote to Dr. Michael Taussig (anthropologist) whom I had been reading with some fascination in my doctoral research; but I really wanted to go into a deeper communion with Taussig and his ideas, and about the academy (my critique) as well... here are the three scans... and, for Carl, if you are bored wherever you are, you may want to have a read of these yourself and feel free to send me feedback in a dream... 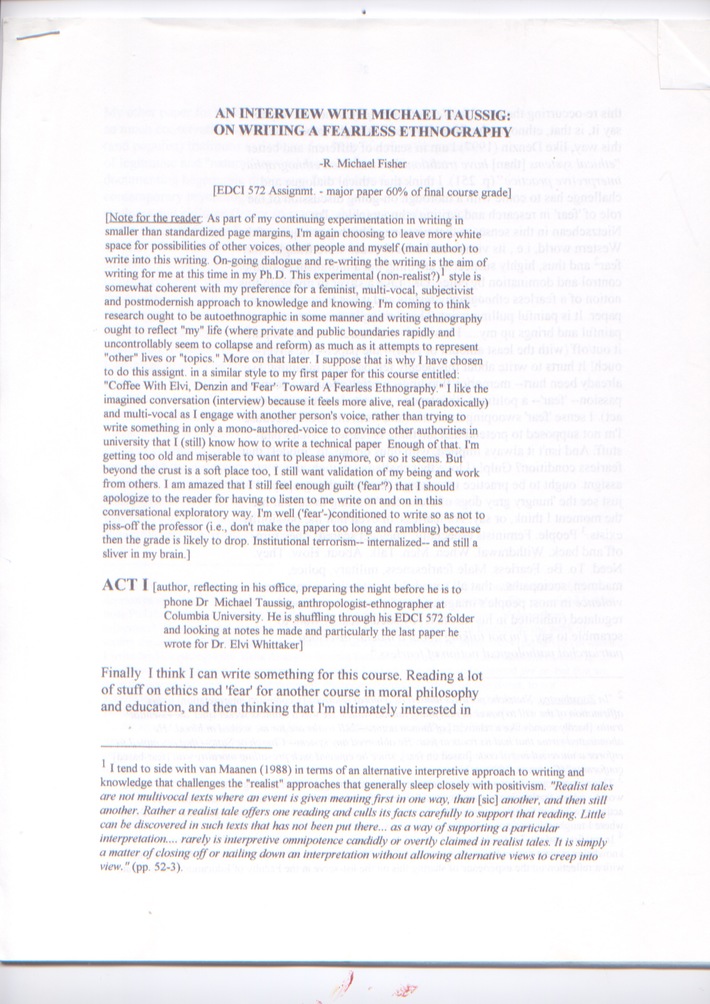