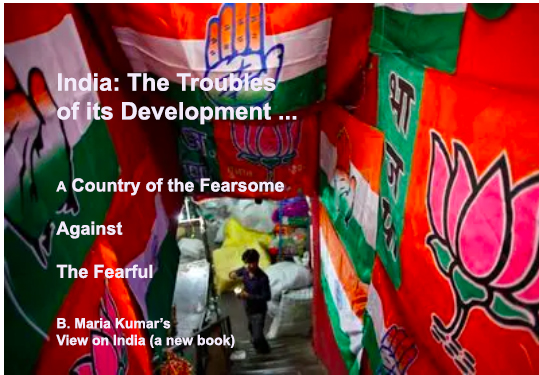 Recently B. Maria Kumar, a retired police chief of India, has approached Desh Subba and myself to respond to his first draft of a book on India and its developmental problems [1]. Kumar, is author of another book with Desh and myself on fearism and law [2], and there's a sense of us being a team of concerned people in different parts of the world, trying to solve some world development problems. We think "fear" is a major (not the only) issue that has to be addressed in development, be it for an individual, a community or an entire nation (in this case India is the topic).

At one point in the new ms. Kumar is head-author, he wrote of the ongoing insidious 'gap' between the weak and the strong in his nation India, which began in ancient times and seems to be ineradicable so far (e.g., the caste system as part of that). He noted that this 'gap' can be examined from the point of view that is interesting to me:

"The survival concerns of the lower castes made them to feel fearful for life whereas the power mongering anxieties [fear] of the upper castes emboldened them to be fearsome." (Kumar)

This is a topic Desh and I will write about in this new book initiative as we three authors would like to produce a small and practical book that would help India (and perhaps other countries) to get onto a more healthy recovery and sustainable and just developmental trajectory.

I found one recent article [3] which discusses the views of various experts inside and outside of India, on the status of India, and questioning whether it is still a "developming nation" relatively on the planet and why has it in many areas "failed" to grow and mature on many dimensions from economic to social improvements (a point also made by Kumar). Here is one excerpt from this recent article:

As the world's largest democracy prepares to go to the polls, we've invited five people from India, the US and the UK who have expertise on economics, women's rights, youth movements, disability rights and urban development to answer the question: "Do you perceive India to be a developing country?"

"The development project in India is nowhere near complete – indeed it has barely begun. It is still a poor country: per capita income iremains below $2,000 (£1,206) at actual exchange rates, and there is still widespread destitution. Development is supposed to involve job creation, with more workers in formal employment in large units, but that has not happened.
Manufacturing still counts for less than one-fifth of both output and employment. More than half of all workers languish in low productivity agriculture, while another quarter or so are in low grade services. About 95% of all workers are in informal employment, and roughly half are self-employed. What's more, the recognised and paid participation of women in working life has actually been declining in a period of rapid income growth.

This basic failure helps to explain several other failures of the development project so far: the persistence of widespread hunger and very poor nutrition indicators; the inadequate provision of basic needs like housing, electricity and other essential infrastructure; the poor state of health facilities for most people; and the slow expansion of education. Growing inequalities do mean that a rising middle class is emerging, but this should not blind us to the lack of fulfilment of basic social and economic rights for the bulk of people."

[my point: We ought to be asking about the development of a nation as to whether it has achieved a philosophy, policy, and practice of fearlessness to the degree necessary to get it out of the 'impoverished' (and destructive) fear-based mentality]

[1] The current book by B. Maria Kumar, R. Michael Fisher, & Desh Subba has the tentative title: India, a nation of fear and prejudice: Race of the third kind.

Tags: fear and development, b maria kumar, desh subba, philosophy of fearism, poverty of mind
E-mail me when people leave their comments –
Follow