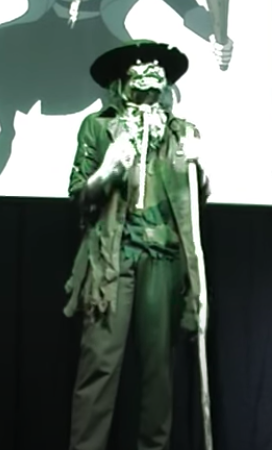 Perhaps as we come close to OCT. 31, Halloween ('Day of the Dead' OR what may better be called 'Day of Fear')-- it is interesting to observe what all the dramatization of the collective psyche that exists at this time of year. As I walk around my neighborhood (in Calgary, AB, Canada) it amazes me still to see how much energy, expense, and ritual is still well and alive on this festival of darkness, festival of fear)--oh, yes, and it is seemingly so perfect that I happen to just find this short video performance online today called Fearosophy.

Fearosophy was coming up in my journaling this morning, in that I was studying the history of theosophy from the late 19th century (formally, with the founders Olcott & Blavatsky). I am always thinking of ways to name, locate historically, and articulate a narrative of compelling nature to the public and scholars around why Fear ought to be given the status of say Theosophy, or Anthroposophy, or Philosophy itself... it's been a long search for decades, and I am not yet happy about the results. Yet, it is fascinating that fearosophy comes back to me and arises as something to ponder more; what capabilities does it have to mobilize greater interest in Fear (Studies, fearology, fearism, fearlessness, etc.).

I looked up to see my own prior definition of fearosophy and in the International Journal of Fear Studies vol. 1 (2), p. 13, there is my cursory definition (I'll repeat):

fearosophy- (RMF) the general philosophical base that specializes in the study of fear (e.g., fearism)

OK. So, that's a start, but it doesn't say much. One would have to inquire much more seriously beyond a mere definition to see what is behind fearosophy (btw, I rarely have used this term since discovering it some many years ago, I think during my dissertation years c. 2000 - 2003, when I looked at all the various vocabularly that had been created seriously around the term Sex; and sure enough, there was a sub-field called "sexology" and "sexosophy" believe it or not, and that immediately triggered the creative impulse to create such a language for the term Fear-- thus, fearology and fearosophy were coined and I have mostly only given attention to fearology, but that said, it is impossible to articulate fearology, in my approach, without an underbelly (less visible) that articulates a philosophy of fear and fearlessness; of late, in the last few years, I am stretching beyond even a philosophy of fearlessness to say that I am working on a fearlessness philosophy (and psychology). So, I realize today, discovering the need to talk again about fearosophy (as analagous to my current study of theosophy) that maybe I need to use both terms more consciously, and thus, to say formally here that a fearlessness philosophy is fearosophy.

Oh, and as for the (anonymously posted) Youtube video called "fearosophy" --well, it's interesting (albeit, not the best actual performance, but the costume and sound track are creative)--and I wonder what story is behind this piece played in front of a crowd (perhaps, in a university class?) [1]--and, it is certainly, dramatizing a message that I have heard (a discourse on fear, and/or discourse of fear)--that is part of a revelatory expressionism, often in arts, that performs FEAR as an icon, as a figuration for the culture at the time (yes, a 'monster' archetypal form)--and, this is historically and psychological significant--it is cultural dynamics of Fear at its most overt form (again, not unlike Halloween cultural dramatization). These narratives, stories and configurations, even when they are quite idiosyncratic like the one in this video performance, tell basically the same thing (you can, find the same message in the universal teachings of all main religions, for e.g.)--is a story, really a meta-story of FEAR HAS CAPTURED YOU, CAPTURED YOUR SOCIETY--FEAR IS YOUR MASTER! Of course, such a dramatization is not something I am saying is 'good' in and of itself. My fearanalysis would go much deeper than these surface dramas and figurations and "teachings" (e.g., the creator of this performance created a text of teaching to go with it on the sound-track)--but, what is missing from such superficial dramatizations is the harder, deeper, and fully therapeutic work--individually and collectively--and, that's where fearosophy has to go to the next level, and the next, and the next... and, then, maybe something really useful (perhaps, even liberatory) will come from it.

1. I did a little online research and in Russian language (w/ English transl.) I found the following e-group discussing the topic of Scarecrow as a symbolic figure from the Batman narrative (sci-fi story, movie, TV show, etc.)--and, it looks like a professor started this in 2013 as a discussion group; here is the original text from this group's website, that accompanies the performance (which is probably the professor himself in the costume):

And I will personally give a podzhopnik to every lazy ass to come to life at last.
The Lord of Fear ... The Lord of Terror ... The embodiment of cunning and unpredictability ...
He does not obey the laws of the society that rejected him. He has his own laws, his own philosophy - the philosophy of fear ... His extraordinary intellect makes him stronger than overpowered superheroes, and the paradox and unpredictability sometimes lead even Batman himself to a dead end ...

He is Jonathan Crane, whose alter ego - Scarecrow - became for him the personification of fear, revenge and rebellion against other people's rules. He instills terror in the townspeople of Gotham City, hiding his own fears, and openly mocks those who once mocked him.
Ice and fire, handsome and monster, genius and madman in one person ... outwardly imperturbable and cold-blooded, but with a real hurricane of emotions and experiences in his soul ... The scarecrow will take revenge on everyone who has ever mocked his helplessness and insignificance, demonstrating all his power and power, the power of Fear and the power of Terror ...

We welcome all Scarecrow fans here, one of Batman's most famous adversaries ... it doesn't matter if you prefer comics, or if you prefer cartoon characters and the role of Cillian Murphy in the films "Batman Begins" and "The Dark Knight" ... feel like in your native Arkham ... Free LSD candies and champagne for all beginners!))
Tags: fearlessness philosophy, fearlessness psychology, philosophy of fear, fearosophy, fearosophical, halloween, fear is your master, festival of fear, dr jonathan crane
E-mail me when people leave their comments –
Follow