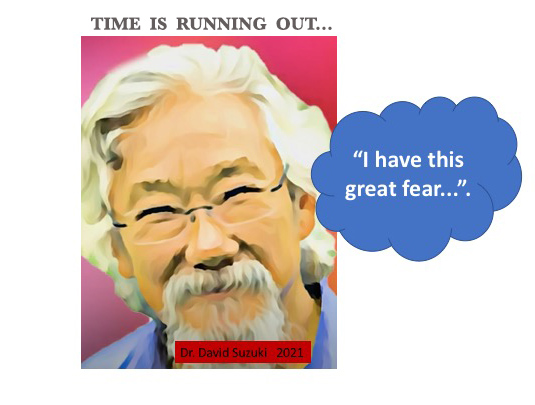 IN a recent interview (Mar. 12, 2020)... I heard this 80+ year old man, scientist, environmental activist, say some really important things. As powerful as he has been in his career (e.g., The Nature of Things, and The David Suzuki Foundation)--helping bring science to education and political policy, etc., he told CBC interviewer Anna Marie Tremonti [1] that he's always been controlled during his career as a scientist and as host of the show and a dignitary of a foundation, etc... THAT "I've been constrained" by those who run those organizations and programs, as they would tell him "...'oh, you can't say that'...you have to couch everything, with 'oh, well, there's this hope...there's this opportunity' and people have never really confronted the reality...seriously enough...", he said.

Now as an elder not under anyone's thumb and their fear that the consequences of him speaking the truth would have been not politically correct, or pissed off funders, etc., David is coming out full blast these days and saying what now fear has controlled in him and others. Some of his truths he spoke in this interview:

- we have less than 10 years to 'turn around' total chaos (e.g., with global warming, climate change, migrations and economy collapsing etc.)

- "This the great fear I have. We're at a point where we have a very limited amoutn of time, in which we can actually do something to prevent total chaos."

The whole point of my blogs on fear and politics of late, is to also speak as an elder (albeit, only age 69)--there is no use anymore to hold back and sugar-coat reality, and yes, the facts of science included--and, yes, there is FEAR controlling almost everything in this world and the ways we 'talk about problems and crises' on a global scale--and, politically, etc. This is going to really be our downfall, and rather soon... as Suzuki, like myself and many others are saying ... I have always promoted FEARLESSNESS over HOPE... because things are that serious.