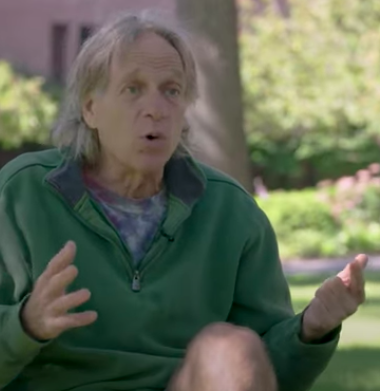 Sheldon Solomon, social psychology on the aspects and changes in uses of TERROR MANAGEMENT.

THE unconscious (existential) death anxiety we carry as an animal, like no other animal, leads to us doing some of the most horrific things imaginable--called 'evil' or what you will. Solomon gives this interview on some of his latest thinking about how he has understood the role of fear/terror over his 30+ year career. TMT (Terror Management Theory, draws on the cultural anthropologist Ernest Becker's work) is a profoundly interesting research trajectory. It is trying to understand the primary motivation of human behavior and how to turn it from its negative-toxic drivers towards how to bring in positive reminders that make people more tolerant (e.g., like humility, gratitude) etc.

Likewise, their TMT research over the decades has shown that, for example,

a) Americans on the whole didn't like George Bush Jr. that much as a leader, but when they were given reminders of their own death, their rating of Bush went up significantly--and, the same finding was true later when they researched Americans on Donald Trump Jr.

b) when reminded of their own death, people generally do not like to think of themselves as an animal creature and likewise do not like Nature as much and will think and act more greedily towards the environment without regard of costs (e.g., use more non-renewable resources)

These are just a few examples of some of the research. And, they have also shown people become more aggressive and violent in intent towards others different than themselves, when given a death reminder (even if it is given subliminally where they are not aware they are being reminded of their death). This is all powerful social psychology and tells us what? PEOPLE ARE highly impacted by the fear experience!!! --whether they know they are or not. "Death" just happens to be on the continue of fear experiences, and yes, somewhat extreme for sure. However, the implication of this research is that people are continually doing some sort of fear/terror management all the time--because they are unconsciously (at least) aware they are going to die.

I have given only the very skeletal aspects of this theory, and I write about in my various publications and some other places on this FM ning. I have also long been a fan of the work of Ernest Becker (e.g., his Pulitzer Prize winning book in 1974 "The Denial of Death" and another I like is his 1968 "The Structure of Evil."

To watch my FearTalk with Sheldon Solomon a few years back go to: https://www.youtube.com/watch?v=dXzUhVTYdb8

It has long been my mission to co-ordinate a synthesis of TMT with my own Fear Management Theory. When I say: "You have fear, then you have more fear"--after a death prompt reminder, I am saying, you have more intensity of expressing the original level of fear in ways that are worse in terms of how you treat others (or even yourself)--and, the reality is this is not necessary if you are conscious of the effects of that "death threat" reminder. Now, comes the critical questions about fear management/education and how to turn this negative toxic reactivity around in other directions and/or to at least minimize it. I have suggested "fearlessness" and Solomon et al. are suggesting giving positive prompts like humility, gratitude and that research in their studies shows people are less negatively reactive following death prompts. So it mitigates things (as you'll hear in his talk in the 2021 video at the beginning of this blog).

Like all theories and studies, there are problems. One good summary of research replication problems with TMT is: https://www.psychologytoday.com/ca/blog/morbid-minds/202103/are-we-really-terrorized-thoughts-death