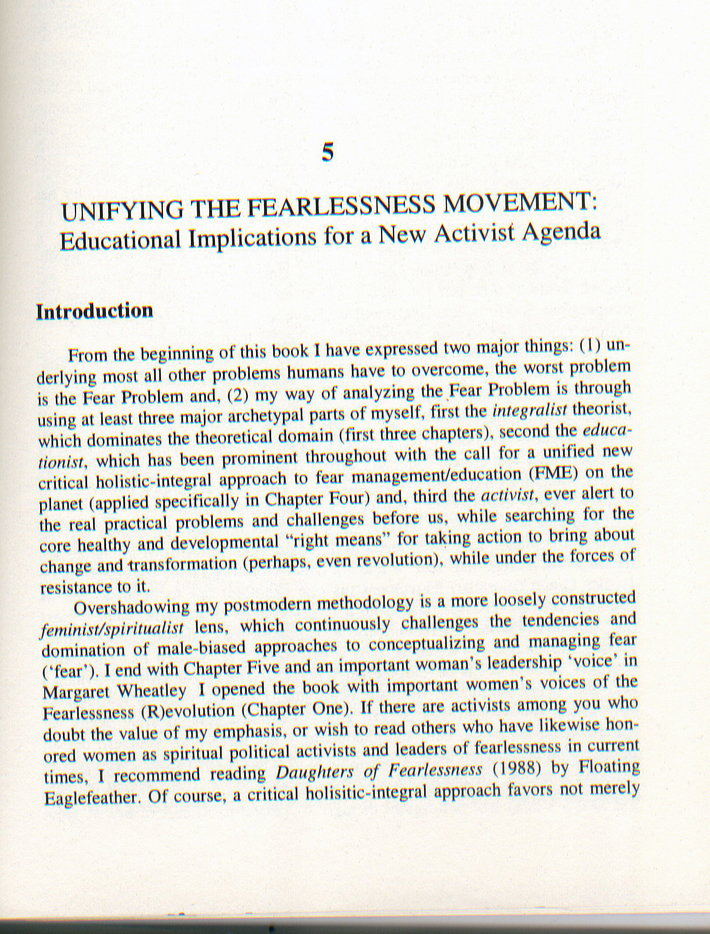 The above last chapter of that book, now 10 years old, is still my foremost vision and purpose in everything I do.

Well, all logic of that aside, it turned out when I was contemplating writing a big book on my 25 years of research and experience studying fear and fearlessness, that I just couldn't make up my mind which book was first. I actually started some drafts of The World's Fear Teachings but then, it seemed too complex and would take many years to complete, as I envisioned it. So I stopped that project. And one day had a shamanic experience 'on the table' with a registered shaman (shawoman) in a therapeutic treatment session and then did my own self-shamanic journey to explore what I ought to do. I knew I wanted to summarize my work for the past 1/4 of a century. The dream-vision and my later logical rationale "pushed" me in the direction to first write the "fearlessness" stuff. I don't regret that move. I wanted to show the world that there is a Fearlessness Movement and Spirit that is always already there and ready to handle all the Fear that is going on and has ever been going on. All we had to do is know more about it, that "spirit of fearlessness" as our cura if and when we were ready to make the choice to utilize its guidance. This simple idea for that first big book more or less came down to the findings of all my research up to that point, in a nutshell, which formed a dictum in The World's Fearlessness Teachings, that is, "When fear arises, so then does fearlessness."

It was a short and sweet, optimistic note. Here was the dictum that I would offer to the world in the early part of the 21st century, and I was curious as hell to see how the world would respond. Guess what? It didn't. Well, not much. Pretty pathetic response. I knew it was a great dictum but why was it not taking hold?

This blogpost is not about this question of the value or lack of up-take of The World's Fearlessness Teachings, which apparently is not as positive and as inspiring as I thought it was. The blogpost here is about the companion volume I never wrote, but am thinking of again, and thinking particularly how to go about it so it will be more "fun" to write and not a multi-year slog out of scholarly pages that no one will want to read. So, I thought I had a really cool idea, and that's what I want to share, and get your feedback on as well. But first a quote, from the Foreword to my first big book on fearlessness:

"Fisher offers a vision.... And he wisely insists that because the terrible curriculum of fear has been implanted in us at every level of our being, it must be addressed in an integral, holistic manner that existentially transforms not only individuals but also their cultures. What Fisher offers us, at both the personal and collective level, are some preliminary theoretical ways and practical means to transcend the matrix of fear and step out (as is our birthright) onto the bright landscape of a teleological optimism--one that lies at the heart of Fisher's profound, and profoundly healing, educational vision."  -Dr. Clifford Mayes, Professor, Educational Psychology, Brigham Young University, Provo, Utah, USA (p. x).

That endorsement is right on what my project is about, but this morning I am thinking maybe this companion volume to The World's Fearlessness Teachings will be just what is needed for the populations of the world to "wake up" and really get on the bandwagon to undermine the 'Fear' Matrix controlling us. Here's my little (big) idea for the companion book. It's title would be The Fear Bible.

Now, a little background before I say what would be in this book, The Fear Bible. First, I have been listening to artist-psychoanalyst and matrixial theorist Bracha L. Ettinger for a few weeks now (with Barbara) and we are so impressed once again at what she offers in way of a critique. The video we watched last night is entitled "Subject, Trust, and Carriance" (on Youtube). She takes apart the Bible discourses in a brilliant analysis of the (mis-)translations from the ancient Hebrew to Roman language and English. She does this showing virtually all the ways the (mis-)translation in English removes systematically any divine-feminine (Woman) from the text where it is really important stuff, and the divine-masculine (Man) is inserted. I won't give details, watch the video.

Point being, her matrixial feminine critical psychoanalysis is a "ground" platform to critique all the ways the paranoidal masculine has infiltrated the Western world, and the Abrahamic religious and cultural traditions and language (i.e., Discourse). In my way of looking at all this I want to do the same analogous thing with the Western world (especially), and show how "reality" has been (mis-)translated to us through texts, traditions and what Michel Foucault, the great philosopher/historian, called big 'D' Discourse. Discourse is the term for all the ways that ideas, and more than just ideas, flow through a civilization or culture in forms of information and then knowledge and then reproductions (e.g., cultural artifacts, architectures, teachings, etc.) of that Discourse.

I see a Discourse of Fear, has been flooding humanity for a long time. We don't know fully how to even recognize this. I want to show that there is a Fear Bible that has been written but is not actually written down in one book like the Bible--and, that's the big problem because we cannot at least have one source to go to to find out how we are being conditioned into one hegemonic Discourse on "reality" that is fear-based (even though, the Bible, may say it is love-based). So, I would research and write the Fear Bible as the book that I believe captures all the ways (and discourses) that are hegemonic in determining how we thinking about "Fear" (again, analogous to how the Bible is the book that captures (most) all the ways we in the West thinking about "God"). Get it?