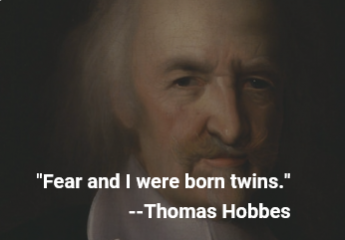 "Father of political science Thomas Hobbes and fear were born twins, they lived together and died together."

"A man is by birth rational and fearful animal, life is process of fearless."

After reading a quote of Hobbes, I started to think his philosophy in fearism perspective. I have given its name Fearolotical (Fear+Political=Fearolotical). Simple logic behind it is; fear precedes politic.

.A man, government, or institution starts when switch on (fear on). Appearance of fear is a silent in Hobbes's entire philosophy, not visible but active like under eraser of Derrida. He says, "Liberty is in silence of law ". (Hobbes146) I say, "Law wakes up; when fear rings bell.-" Fear is gravity and motion, fear (>) is greater than (<) other emotions. It can be scientific and mathematically explained because Hobbes preferred scientific presentation. So, our motions (life) move towards fearless. In below  images, fear and fearless activities are motion of fear-gravity. The state of nature was between two fears as sandwich (before coinage and after avoiding).

Political philosophy (Fear+Political=Fearolotical) philosophy can be understood exclusively (Hobbes) of Thomas Hobbes was born because of fear (state of nature and civil war of England). According to him, the nature of man was solitary, poor, nasty, brutish, and short (Hobbes 83-84). His famous quotation was he was born twins with fear. He was not only born twins with fear; he was lived with fear and died with fear. He had preferred absolute monarchy; it was his best system to preserve live. Core part of whole philosophy is in the heart of preservation. Again, preservation can be defined as binary of fear. It means he had feared all the time. No preservation, war, threatening, warning, danger, death, killing, violence, and insecure were to fear. In the state of nature man had special character that was rational. Using his distinct attribute, he avoided the state of nature.

Preservation, protection and secure was his priority. We can read it starting to the end of The Leviathan. It looks common for all the people; as a Fearism author, I look everything; life to cosmos in Fearism perspective.

It is obvious that since the beginning of his life, fear had great role. Prior to the civil war of England, he guessed that the situation was worsening. It was the Fear of unknown happening, thus he left England and lived in Paris. Though in Paris; fear was chasing him all the way of his life. It couldn't detach from body, it was the shadow of life. He was looking external solution, but it was dwelled within him.

He exiled himself in 1640 and wrote the Leviathan when he was in Paris. He thought, the accident of Socrates might repeat to him. Same phenomena were happened to Aristotle 323 B. C. such chaotic and fearful situation played major role in his thinking. Hobbes applied fearful life, and environmental fact in fearolotical philosophy to draw people's attention. He wanted to make scientific laws like law of gravity and motion. Law of gravity is the law of fear. How much magnetic power fear had; nothing had in comparison to fear. Every compass of life was attracted by fear (magnetic fear). Omitting the fear from the state; state would be paralyzed. It proves that state of gravity was the fear. Fear had the powerful magnetic and hypnotized power. One needle of fear was towards him and he wanted to turn out that needle to the political direction. His political direction was the political science. This political science is what I called 'Fearoloticalogy'.

A man used his reason to avoid the state of nature. He explored and found the law of divine and law of man. He mixed up both and developed political science. In the round figure, political theory of Hobbes is a theory of fear and fearless. It is an image of his state and he writes about state as: -"The gods were at first created by human fear. "The old poet is very true. In philosophy of  Fearism (2014) I have written god is a fear. In the state of nature, there was nothing except fears of starvation, animals, and natural powers. These calamities were risk of life. So, they started to worship them as a god. After many years, people began to fear with them, which they established.

A man, who looks too far before him, in the care of future time, hath his heart all day long, gnawed on by fear of death, poverty, or other calamity; and has no repose, nor pause of his anxiety, but in sleep.(ibid 72)

-Fear of death, evil, poverty, or other calamity is the bottom line of a man. For being that there be caused of all things that have arrived hitherto or shall arrive hereafter; are cause of fears.

Hereby it is manifested, that during the time men live without a common power to keep them all in awe, and they are in that condition which is called war; and such a war, as is of every man against every man. (ibid 83-84)

-"They were in that condition which is called war; and such a war, as is of every man against every man." It is famous dictum of Hobbes in 17th century; it is very practical hitherto now. It was that time men lived without a common power to keep them all in awe. In normal condition, we seek friends, relatives, when abnormal situation appears, all goes to deem and self – preservation comes forward. It happens when food becomes shortage like shortage of mask and sanitizer nowadays. In the state of nature, nobody had food store. It was the reason; war was  against of every man. In the fearism it is written, man has stronger war than dog that fights for the bone. Man's fear struggle is more danger than animal because man can use rational, nepotism, bribes, conspiracy, flatter and force. 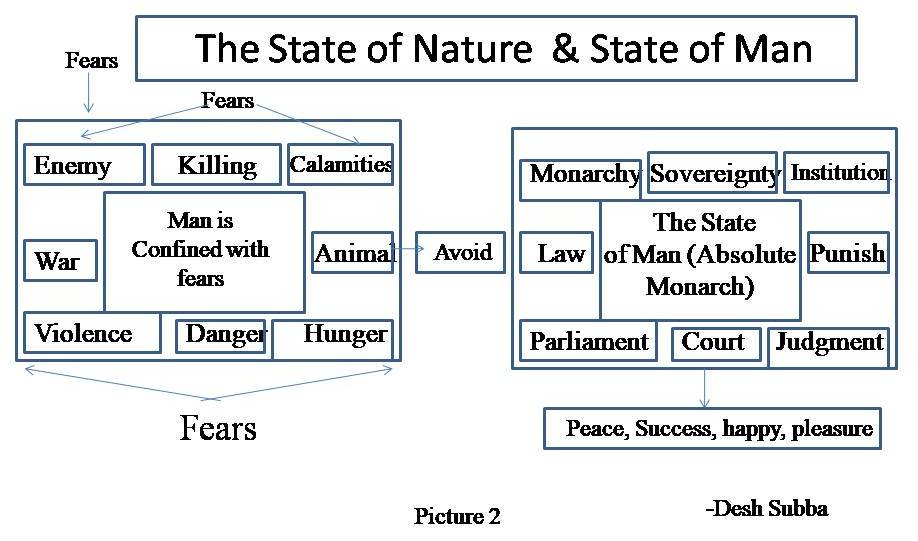 THE RIGHT OF NATURE, which writers commonly call just naturale, is the liberty each man hath, to use his own power, as he will himself, for the preservation of his own nature; that is to say, of his own life, and consequently, of doing anything, which in his own judgment, and reason, he shall conceive to be the aptest means thereunto. (ibid 86)

-For the preservation the right of nature of a man; that is to say, of his own life; and consequence.

A LAW OF NATURE, (lex naturalis) is a percept, or general rule, found out by reason, by which a man is forbidden to do, that, which is destructive of his life, or taketh away the means of preserving the same; and to omit, that, by which he thinketh it may be best preserved. (ibid 86)

-A law of nature, which is forbidden to do, that, which is destructive of his life, or taketh away the means of preserving the same, so he wanted to avoid it because he didn't see any preservation there. Omit, that, by which he thought it may be best preserved. It was the thinking of Hobbes.

The mutual transferring of right is that which men call CONTRACT. ((ibid 89)

-At last the nature of state reached to the position of  CONTRACT. It was the mutual transferring of right to save the life. According to Hobbes, the best solution and option to exit from the solitary, poor, nasty, brutish and short was contract.

Good and evil, are names that signify our appetites, and aversions. (ibid 105)

-Appetites, and aversions is also famous dictum of Hobbes. Appetite was the prime reason of war. Limited food couldn't fulfill the appetite, to find more; needed to invade others. No one could sit silent; their appetite didn't let a man sit in rest and peace because if it didn't fulfill, chances would be to lose the life. Increasing appetite was the caused to make enemies. A man was always sandwich between fear of being hungry and fear of enemy. How to do the best to preserve life? It was the final cause. Aversion was secondary action. If a man didn't like or fear, he had a way of aversion. In some case, a fear chases a man.

If they think good, to a monarch, as absolutely, as to any other representative. (ibid 123)

And thus I have brought to end my Discourse of Civil and Ecclesiastical Government, occasioned by the disorders of the present time, without partiality, without application, and without order design than to set before man's eyes the mutual relation between protection and obedience; of which the condition of human nature, and the law of divine, (both natural and positive) require an inviolable observation. (ibid475) -At the end Hobbes in his Fearolotical philosophy; Discourse of Civil and Ecclesiastical Government, he focused in the mutual relation between protection and obedience. Base of his state was the protection; it was in first priority. Outstanding were supportive to the protection.

It shows that man abandoned the state of nature because of many problems and fears. He made social contract, in the contract; it is doctrine that; sovereignty may be assembly, absolute monarchy and institution. To sovereignty, through the contract, he gave all his natural right except self – preservation. In the state of nature, self-preservation was in danger; so, he left it. If preservation was danger in state, he could revolt against the government because this right was not handed over to the state. At any cost and at any means preservation was the most important. If no life everything would be useless. To avoid the fear of the state of nature; he created artificial social contract and handed over to absolutely power (monarchy, government and commonwealth).Entire political philosophy of Hobbes wandered around the hide and seek of fear and fearless. Not only his theory; theory of John Locke, J.J. Rousseau, Socrates, Plato, Aristotle and Karl Marx is also in the periphery of fear, but it is veil. A man is by birth rational and fearful animal. For  any kinds of contract there was a hidden fear. The state of nature was the state of fear for a man because a man was by birth rational and fearful. He had a great war against his fears rather than his enemy. A man lived with external and internal fears; he had war against his fears all the time. It was known as fear struggle in the history of fearism.

What was the incident Hobbes wanted to avoid the state of nature, pin point was fear. Cruel civil war he faced and it stroke him. He has taken the state of nature as its backbone. His state of nature is hard liner, Locke softer and the Rousseau the softest. After reading him and sharing experience, we can say, a man by birth is fearful animal and life is the process of fearless. Political Fearism is a faculty of Philosophy of Fearism.

He has long reference about Bible and explanation in the last chapters. His advocating was the absolute monarchy. He had good relationship with royal families. Hobbes was against power division. He argued share power means share punishment, reward and law. It developed powerless sovereignty. As consequence; it could beget unhealthy society. He followed the absolute power system of God. God never shared his power that was the reason; everyone followed him because everyone got terrified with him. One point was mismatching; in the kingdom of a man, people can revolt the government if danger comes for the preservation but it was impossible in the kingdom of the God.

(I have taken reference from book of Thomas Hobbes the Leviathan. In the article I have shown the fearism effect on his political theory and invisible fear was the important to invent political science.) 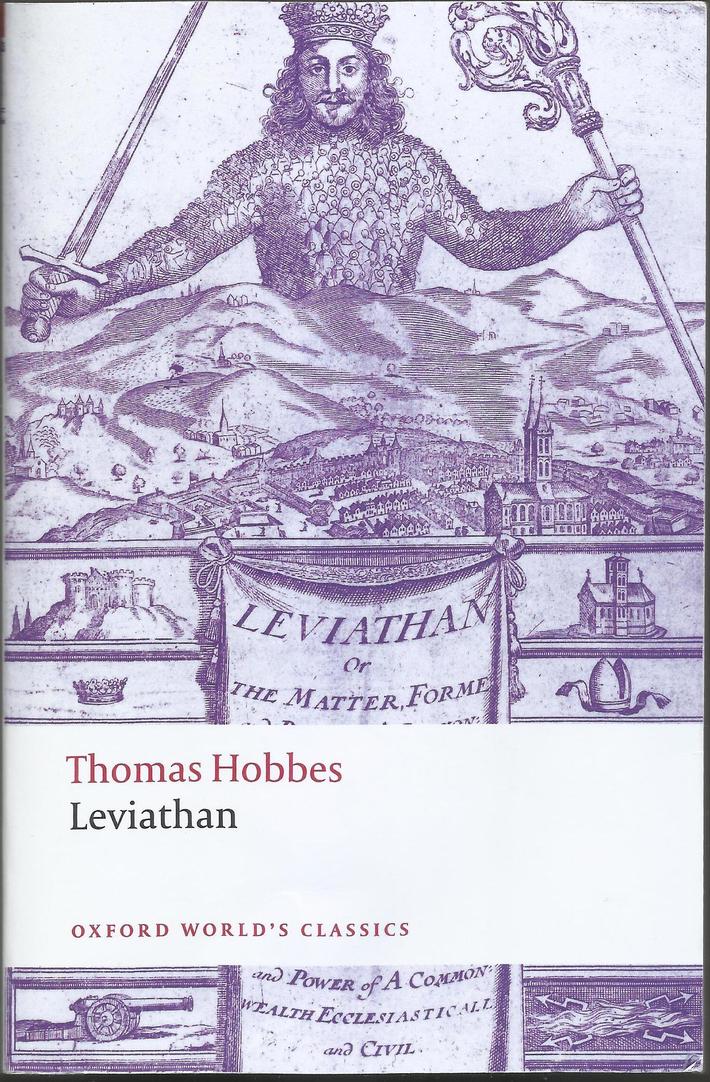