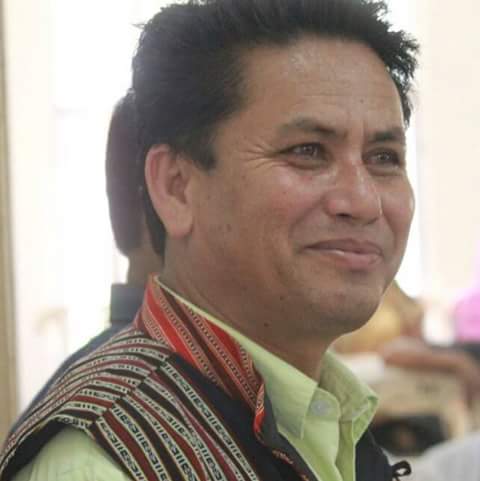 In recognition of his exemplary and outstanding contribution in literature and culture,

he was honoured with many prestigious awards in India and abroad.

On the bank of the Kapali river, the greater area of Tumpreng in West Karbi Anglong, an isolated village, Mugasong is distinct amidst the marshy landscape of the area. In this tiny village, on 30th June 1969, a poor and humble farmer family, comprising Jay Bahadur Kafle and Pabitra Maya Devi, was blessed with a boy. Rana Kafle resembled “war” in Nepali.

Since his childhood Rana Kafle was regarded as a mediocre, simple, kind hearted and adventurous in nature. Starting with his primary education at a tender age from Mugasong L.P School, then Tumpreng H.S and Bhellapara High School, Kafle went on to pass his matriculation from Bhellapara High School and his college from Hojai College. Kafle went on to bag certificates, diplomas and degrees in various vocational courses too. In course of time, Kafle grew up to be a man of influence in many ways in his area and in the state. A fine-looking man, as he was, Kafle emerged as a multifaceted personality, a resourceful philosopher, social worker, educationist, literature and cultural activist. His noted achievement was in promoting the “Indigenous Cultures of Assam” as a cinematographer, when his achievement was highlighted in one hundred “Indigenous Cultural Programmes” in the NE region through Doordarshan. He also achieved a progressive and extraordinary career in Radio and TV Channel through his “Exclusive Interviews” in India and abroad which are regarded as milestones in promoting culture, literature and fearism. During his school and college days, Kafle was actively involved in political activities, extending support and voicing concerns as student activist. He was an active designated member of AGSU, BGP, Assam Sahitya Sabha, Visha Nepali Sahitya Maha Sangam and so on. For Kafle, there was always handful of activities to do and indulge in. In recognition of his exemplary and outstanding contribution in literature and culture, he was honoured with many prestigious awards in India and abroad. These include:- Tilmati Bhaibad Puruskar 2014, Dharan, Nepal;,Keshar Dev Giniya Devi Bajaj Smriti Sanman 2015, Shillong, Meghalaya; Raghuvir Sharma Smriti Kadambari Sanman 2015, Jabalpur, MP; Bibhusan Shree Sanman 2015, Badayan, U.P, Kabya Kabid Rashtria Sanman 2016, Sonitpur, Haryana; Gobin Singh Smriti Sanman 2016, Muradabad U.P, Maharaj Jain Smriti Sanman 2016, Shillong, Meghalaya, Sahitya Ratna Manab Upadhi and Rameswari Devi Shiva Kumar Shastri Smriti Sanman 2016, Shrinath Dham, Rajasthan, Bhasa Bhusan Sanman 2016, Muradabad, U.P.; Sahitya Ratna Sanman 2017, Tezpur, Assam; Rashtriya Gaurab Sanman 2017, Chitaugarh, Akola, Rajasthan; Kanti Dhara Sahitya Ratna 2017, Meroth, UP; Sahitya Pratibha Sanman 2018, Muradabad, U.P.; Jyoti Shrastha Sanman, Kathmandu, Nepal. conversation with Desh Subba, the founder and promoter of latest Philosophical Theory “Fearism”

Another notable turning point in his life of activism was the coincident telephonic conversation with Desh Subba, the founder and promoter of latest Philosophical Theory “Fearism”. From 2012 onwards he has been in constant touch with Desh Subba and has been involved in propagating this ideology in many parts of India and abroad. At the initial stage fearism was just a subject matter of “Research” for the common people. But it was Rana Kafle who propagated Fearism in its truest sense. In 2013 Rana Kalfe proposed to hold a Mega International Meet on Inter Cultural Relation and Fearism Programme at Dharan in Nepal which was organized by Fearism Study Center. In the meet 53 established writers including fifteen Sahitya Academy Winners from India participated and held interactions between the two countries. As a matter of fact the theory of Fearism evolved as an integral subject matter to discuss in the world arena. Meanwhile, the Sikkim University had already consented to include Fearism as an additional subject in the college syllabus. But then owing to unpublished scripts of the thoughts propagated by Desh Subba, no publication could be made available in the market. That very year in 2013 Rana Kafle resumed his unprecedented journey in the north eastern states, other parts of India and neighbouring countries including Bhutan, Myammar and Nepal to promote Fearism among the common people. He was a pioneer who upgraded an interaction programme “Face to Face” Basibialo (meaning ‘to interact at leisure’ in Nepali) and brought into limelight about Fearism as a universal subject as highly essential for the benefit of humankind. He also highlighted statistics and information directly to Desh Subba. As a matter of fact, he took initiatives to publish “Bhaibad” as a Nepali script through Sangrilla Prakashan, Kathmandu, Nepal. Later on, the same book was published in English, translated by Rajendra Subba and Bhabindra Kumar Rai under the publication house of xlibres.com by American Publisher to distribute in the world market. After the first publication of this book (Fearism) in 2014, Rana Kafle was conferred with the prestigious “Tilmati Bhaibad Puruskar” award for his strenuous work to promote and propagate “Fearism” in the world literature. This earned him indomitable fame and led to a series of other recognition and awards from various literary organizations in India and abroad. Through his verses Kafle elaborated broadly about Fear in vivid and distinct notations. Relating to this subject matter, Rana Kafle had published two precious books in Nepali, viz, “Bhai Darshan Ko Majherima” and “Bitunga”. In the initial book he highlights about his own experiences regarding fear. On the other hand, “Bitunga” is also a collection of essays which are based on fearism as a subject matter. In this book he states and demonstrates the pen picture of De Destination of cultural assimilations in the broad sense. The author also published “Nani Ki Kahaniya” a collection of Folk Tales of various tribes in Hindi. Apart from these some of the books which he published are Maya Ko Bandha (Nepali novel), , Hemprek (Assamese novel) based on Karbi Anglong political scenario), Bisphot Bhai Puchi (Nepali Short Stories), Astitya (Keshra: A new theme of Nepali Poetic Diction), Kapali Bagarma Butoliko Sabda Saru (Nepali Poetry) among others.