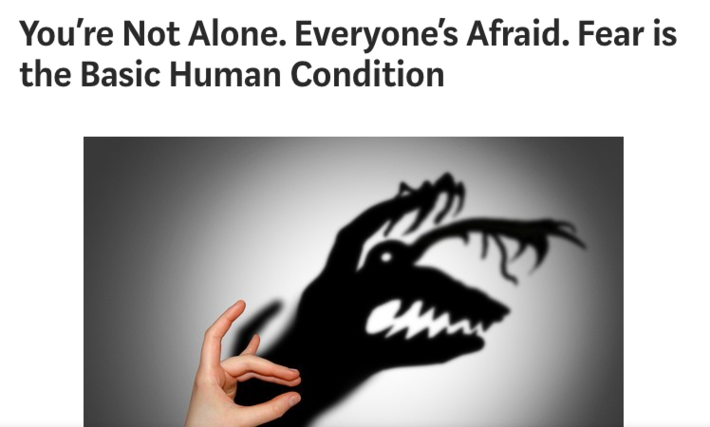 I recently found this image (as Halloween, or 'Day of the Dead' or Hallomas or Samhain) on the internet. The title was provocative and speaks to the concept of which this blog is all about: that is, the proposition (if not theory) that the basic core of the human condition is fear (or fear-based) (?)

My point of writing this very short blog is to say that there is still not an adequate (referenced) scholarly synthesis of important writing (philosophy and theory) on the proposition in the internet poster and/or in the authors' work mentioned above. There are fragments of support references for their claims but not yet the document that is needed to give scholarly credibility (at least, not as far as I am concerned).

I am of late beginning to see some critical thinkers in the early 1970s that I will be documenting their positions and arguments, theories, and works...coming from backgrounds in philosophy/anthropology/political science/theology... it is still too early for me to make my case for their support of the Fisher-Subba position re: fear is the core of the human condition and history itself is the unfolding of that human-fear relationship--as one of, if not the most powerful relationships on this planet (i.e., fearuality, fearological reality).

1. Fisher, R. M. (2010). The world's fearlessness teachings: A critical integral approach to fear management/education for the 21st century. Lanham, MD: University Press of America. Subba, D. (2014). Philosophy of fearism: Life is conducted, directed and controlled by the fear. Australia: Xlibris. Another young budding philosopher of this synthesis with his own nuances is Osinakachi Akuma Kalu (with his two books on fear in the last two years; e.g., The First Stage of the Fearologist. Amazon CreateSpace).

3. For a brief intro. discussion of Fisher and Subba on fear and love, see Philosophy of fearism: A first East-West dialogue. Australia: Xlibris (2016), p. xxxi.