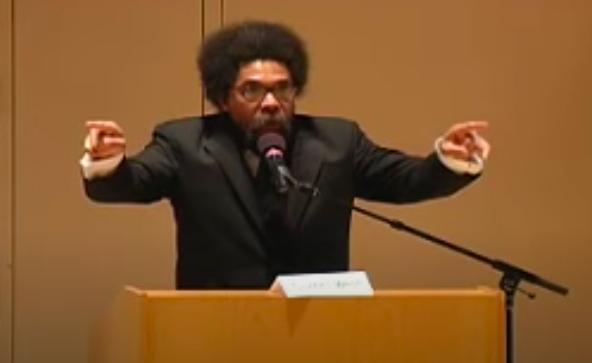 This has got to be one of the most stunning philosophical lectures/performances of a genius liberal-radical contemporary philosopher (Cornel West) in 2014, there is-- I listen to it and it touches so many chords and choruses of the type of philosophy I have been attempting and working through, and now coming out in my latest book "The Fear Problematique: Role of Philosophy of Education in Speaking Truths to Powers in a Culture of Fear" (IAP, in press).

At one point in the talk, I particularly was delighted by West's bringing forward the Josiah Royce criticism of American philosophy, whereby (paraphrasing Royce), West says, "We need to re-word philosophy in a way in which it speaks to our times." Oh, yes! All of my work on centralizing the dark shadow (i.e., the tragic, tragic comedy, calamitous, the horrific)--and naming it as "fear"--for a start, has been about then finding the re-wording of philosophy laid down upon a new Fearlessness Paradigm. The search? the quest? the aim? For West and myself it is for paideia [Paideia (also spelled paedeia) refers to the rearing and education of the ideal member of the ancient Greek polis or state. These educational ideals...]