Black Lives Matter (BLM) has become a pivotal, and controversial, social movement. Triggered primarily by repeated incidents of black males being killed (murdered) on the streets of America by police officers (particularly white officers) has left a mark that is now indelible and performed in the Floyd Rebellion (street protests). It has not been pretty and disturbs and terrifies many. And, not all people of color agree with the way things have gone down on both sides--the authorities and the rebellion protestors. But lots of good things are also coming from the rubble, you might say.

So I give hats off to the BLM better aspects of liberation and its allies generally for the 'wake up' call; and especially my focus here in this blog is on the positive push of some BLM folks and other sensitive educators and therapists to help get to root causes of racism traumatization (and/or racialized trauma). I use these latter concepts, from a healing and fearlessness perspective or paradigm for social change and transformation. I am less a fan of the politically and ideologically driven 'playing the race card' and 'fanning the race wars' strategies on all sides of the battles today between opponents. Thus, with this distinction of my work and interest, I would argue that nowadays, it is really questionable if the term "racism" or "race" are actually of any value to healing, just like the term "racists" is to me only a way to continue the worst of racism traumatization [1]. The cycle of domination-fear-conflict-violence is hard to break, but I believe breaking the language and making ourselves more aware of emanacipatory and healing language is a good start to the 'rebellion' that all of us could participate in and not just BLM on the streets.

In this regard, obviously my work is about moving from a culture of fear to a culture of fearlessness, and that ideally would be what BLM is attempting to do. I am not telling BLM what to do nor speaking as if I know all about them and their work. I certainly don't and I am willing to be informed by them as they see fit. I will listen, and I will open up opportunities for healing on their side and my side--and, all the other options of our juxtapositioning as human beings attempting to figure out how to live together well on this fragile planet. I am concerned that forces of tyranny take many forms, and no group is immune. So, to counter the fear-based tyranny movements of all kinds, on all sides of the conflicts in societies, let's take a look at the notion of racism traumatization as a learning and healing process. I have not delved a lot into this field but I have come across a book my life-partner is using for her own liberation via ancestral healing work and is planning to use in a local non-profit organization in the urban setting of the city we live in. The book is by Resmaa Menakem, a person of color and expert on conflict and violence and healing (individual and collective). The title is "My Grandmother's Hands: Racialized Trauma and the Pathways to Mending Our Hearts and Bodies" (2017). It is radical on many fronts, but what it does not do is 'pit one race against another' nor attempt to show any superiority in any group that is innate or given by God, or any other power. Menakem writes with wisdom and compassion and a lot of street smarts about racialized violence and oppression--and, better yet, about racialized trauma work. I have included a couple pages from the book, particularly on Menakem's advice for reforming policing. I have also written a book with two colleagues on this topic but more general on the relationship of fearism to law and criminology [2]. Menakem's work is very pragmatic and I trust you'll find these couple pages useful for knowledge and as potential to take into action in your communities. 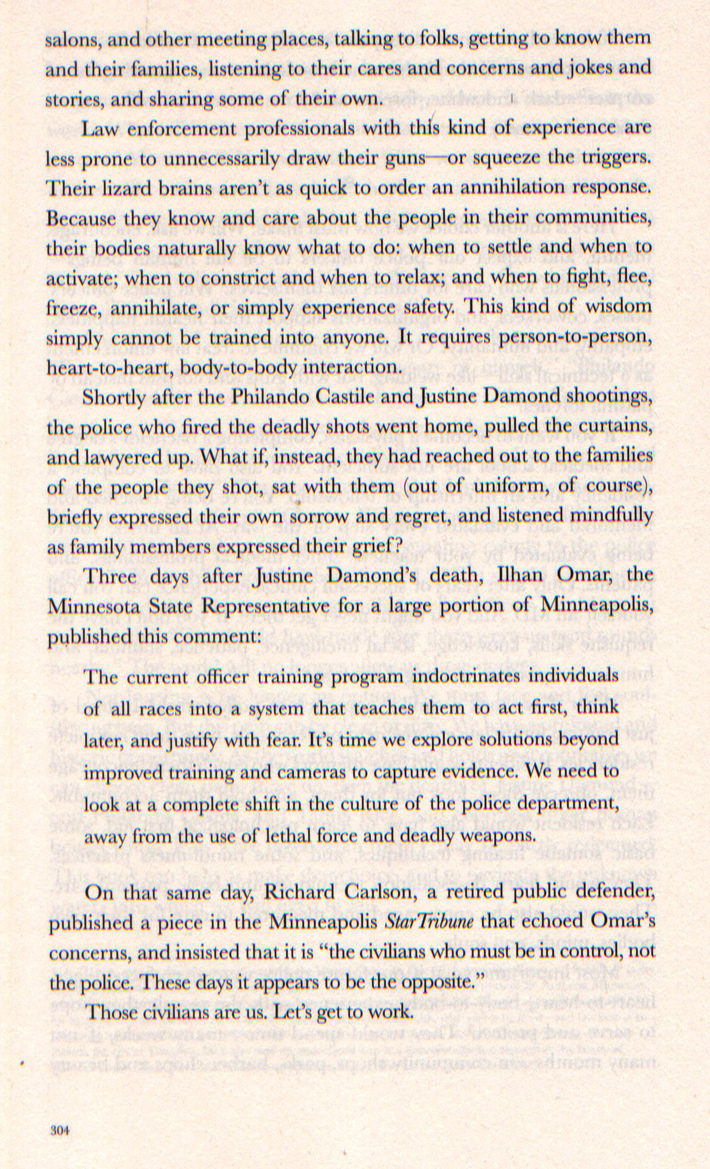 1. Another angle of understanding racism traumatization is through a critical analysis of "white supremacism" and an even more interesting angle is through critical analysis of tribalism-ethnocentricism and their worldviews (e.g., in Spiral Dynamics integral theory). No doubt, societies today and in the future will best be served by multiple angles on the problem of "Race" in America or anywhere in the world. For me, I always have looked with great focus on the problem of fearism-t (toxic form) as the core root of terrorism of all kinds and those are the isms that are articulating the other isms--that is, sexism, racism, classism, adultism, and so on. Oppression is fear-based in an ideology of fearism-t. All that said, my owning responsibility for my white caucasion historical situation and current privilege is well taken as something I have to always look at as part of white supremacism agendas--that is, oppression.